Immunization Programme In India – How Effective Is It? 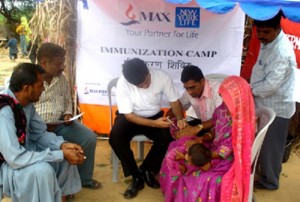 The program covers six vaccine preventable diseases namely polio, diphtheria, pertussis, tetanus, typhoid and childhood tuberculosis. Later, the measles vaccine was added after the elimination of the typhoid vaccine. In 1992, the UIP was integrated with Child Survival and Safe Motherhood Program (CSSM), and in 1997, it was added to Reproductive and Child Health Program (RCH). Polio eradication program was launched in 1995-96 under which National Immunization Days (NIDs) and an active surveillance for acute flaccid paralysis took place.

Till date the immunization program is unable to achieve its objective of achieving and sustaining universal immunization coverage in infants. Although the number of cases have dropped significantly as compared to earlier years but there are a number of issues at hand which has made the universal delivery system inefficient. The first and foremost is the inadequate coverage which means many infants are only partially immunized. Second is the lack of training of field personnel for data storage as well as safe injection and disposal of vaccines. Another is the lack of cold storage facilities for vaccines. There is no effective social mobilization plan and communities are still unaware of the initiative as well as immunization schedule or are skeptical about the quality of vaccines. There is not enough surveillance and monitoring of delivery services provided. At many places there is lack of designated staff. There is no record of newborns in an area and thus the task of immunizing them before their first birthday remains a challenging task.

Ensuring primary health care to pregnant women and newborns is the responsibility of the state. The UIP by the Government of India is commendable but it needs better management and supervision to achieve its objective wholesomely.