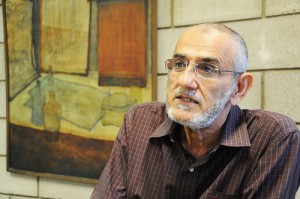 Peace is a relative concept that cannot be limited to a certain definition. For a realist, peace is merely an absence of war, while many believe that peace is a concept which enriches and nourishes the soul. It is also about hope, imagination and creativity and movement towards a society based on the values of social justice with equal opportunities for everyone in terms of education, healthcare and even distribution of resources.

There are a number of people who have worked in this context. History is full of examples with such peace heroes, and so is the present. In my view, a genuine peace has hero is one who primarily working and essentially advocates and implements peace. He is the one who believes in this country and strives for making something out of nothing. These are individuals who have made major contributions to creating a more peaceful world. Peace heroes provide new role models for young people seeking to build a more just and peaceful world, and they provide a good place to start for anyone who wishes to make a difference in creating a more peaceful world. All in all they work for creating and strengthening the elements of peace in the society.

We shouldn’t be looking for heroes in the skies, our heroes are among us. There is a lot in Pakistan to be happy about and feel proud of. Keeping this in view, my Peace hero from Pakistan is Mushtaq Chhapra who is one such person.

Mushtaq Chhapra is an eminent and revered personality in the business circle of the country’s cosmopolitan center. A philanthropist at heart, he is occupied with many charities in the health sector, food security, art and most importantly education and also serves as the honorary counsel general for the Nepalese Embassy in Karachi. As a businessman, he has manufacturing concerns in Pakistan.

Born on 7th September 1949 in Karachi, Pakistan, Chhapra belonged to a well to do industrious family of the Memon community who had migrated to Pakistan from Gujarat, India during partition. After completing high school, in 1966 he joined his well established family business of textiles. “From a younger age, I became involved in social work, first at local and then at community level and also began working with different welfare organizations. I saw my elders working for the poor and was thus conditioned in such a way that I was inclined towards community service since school age” he says.

It was the year 1985 when Chhapra along with a few dedicated individuals formed his first large scale welfare organization in the field of healthcare popularly known as The Kidney Centre. It was once merely a dream at that time and today by the Grace of God and the help of generous individuals and corporations, the Kidney Centre continues to grow and fulfill that dream. The Kidney Centre is one of the largest up-to-date medical facilities providing wide-ranging, quality renal care to thousands of poor patients — either entirely free or largely subsidized.

The Kidney Centre initiated as a small dialysis unit with just two machines, is now a hundred beds, specialist institution providing complete care for nephro-urological diseases. It also serves as an outstanding teaching, research and lifelong educational institution for nephrology, urology and associated fields. This has all been because of his dedication and commitment towards Peace.

Chhapra also the heads the Jinnah patients Aid Foundation and is serving as the Chairman of its executive committee.
Seventeen years back, the degenerating structure of the Jinnah hospital came to the notice of a group of friends who acknowledged the rich history of the hospital and the value of its capacity in Pakistan. Although the hospital provided patients with basic free medical attention, the decayed wards and deficient equipment made visits to the hospital agonizing.

From this anxiety sprung the vision of Patients Aid Foundation. Maintaining a strictly non-political stance, Chhapra launched an independent drive to raise funds, to reconstruct dilapidated buildings and reinstate crucial medical equipment. Having effectively completed seven massive projects, the Patients Aid Foundation has been successful in establishing a determined reputation and hopes to provide a committed structure to the largest government hospital un Karachi, aiming towards restore and revamp wards and medical equipment.

Moreover, in 1995, when things were going from bad to worse in the country, with kidnappings and intolerance on the rise and the law and order situation deteriorating, Chhapra decided to explore more areas of development as he was concerned about his country. After authentic research, he found out majority of the problems that Pakistan was facing were due to the dismal state of education in Pakistan. “Education is the solution to the many ills prevalent in the society – from lack of basic knowledge about hygiene to developing more sense of tolerance” he said. In order to improve the system, he along with other like-minded people opted to set up a school for those who could not afford quality education which is now one of Pakistan’s leading organizations in the field of formal education. This organization is known as TCF – The Citizens Foundation. He is the founding committee member and the current Chairman of this organization.

From the first six schools in 1996 in Karachi only, as of 2010, it has progressed to establish more than six hundred purpose-built school units nationwide with an enrollment of ninety-two thousand students.

TCF makes no discrimination in terms of ethnicity or religion and enrolls students on a first-come-first-served basis. It also has a committed Teacher Training Center in Karachi for the ongoing training of its faculty and provides logistical support to its entire faculty; creating more than seven thousand jobs have been created in communities in which it operates.

TCF’s vision is to remove the class barriers and to make the citizens of Pakistan, agents of positive change. It believes that access to primary education is the right of each and every individual and not an opportunity. Apart from following the regular syllabus, it also focuses on the character building of students and equips them with high moral values and self-confidence.

Also in the recent floods, the Citizens Foundation immensely contributed to the Flood Relief efforts with successfully distributing twenty million meals to the affectees before Eid in twenty five cities of Pakistan with nationwide and overseas support. When asked why TCF opted to support the flood victims, he said “It was a natural reaction as many of our schools were flooded. We had the resources and the manpower therefore we stood up for our fellow brothers and sisters”.

Mushtaq Chhapra has tremendously worked to maintain peace in the society. His vision is to create Pakistan as a modern welfare state, which provides a safety net for the poor and needy while providing basic health and education and promote peace throughout the country. He feels this as the only way to tackle Pakistan’s many social problems and hopes that one day; Pakistan will be a model for other developing countries. He advises the youth of today to serve their country well, to focus on their education and to be willing to learn from their seniors/ peers for a prosperous for themselves and the coming generations of this country.