The Fantastic Free Fall: Bungee-Jumping, The Mother Of All Adventures 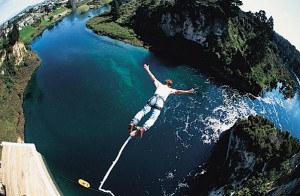 Have you ever experienced butterflies in your stomach while coming down in the Giant wheel? Bungee-jumping is exactly the same experience magnified. It consists of falling from a tall structure while being tied to an elastic cord. The core of thrill lies in the free fall with accelerating gravity, the rebound of elastic tied and the oscillations in the air upside down. The tall structure can be a building, mountain or even moving objects like a hot-air balloon or a helicopter.

This crazy sport traces its origin in Pentecoast Island in Vanautu where young men were tied to vines and thrown upside down as a test of their manhood and dare-devilry. Even in central Mexico a similar tradition was followed way back in the time of Aztecs. The modern Bungee-jumping was born in the late 70s in Bristol, causing arrest of jumpers for their eccentricities. But it was just the beginning of this adventure fever — and soon it spread like a wild-fire. Jumpers now began to try hot-air balloons and airplanes along with tall buildings and bridges. Why! Even James Bond, the suave agent could not resist this free fall and tried it successfully in the Golden Eye.

India lags far behind when it comes to such reckless adventure sports. However we are taking slow but steady steps to pursue this flighty sport. The ministry of tourism has recognized Bungee-jumping and provides the required assistance and equipments, especially in hilly areas. The Himalayas provide the ideal rough rocky mountainous terrain. You can also take a dip in the Ganges while being suspended in the air. Small hill stations like Panchgani, Lonavala and Pachmari, and even cities like Pune, Mumbai are also coming up with facilities of Bungee-jumping.

Though there are chances of severe injuries in this jump, the adrenaline rush overtakes them. The cord or the elastic length forms the basic factor in reducing the risk. You can experience the euphoria in varied forms after trying this! The fight or flight gland can never say no to this. So, next time if you get a chance to jump, like the Nike slogan goes… Just do it!!!