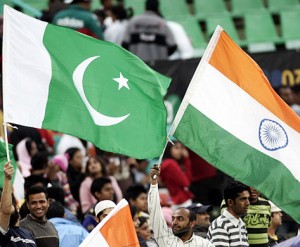 Post India v/s Australia quarter final; when Tony Greig said that there will be a Vendetta on 30th March, it implied no exaggeration. The first semi final of the World Cup 2011, India v/s Pakistan has caused a huge frenzy amongst the cricket fans and media. The game fever has gripped the whole nation and the men in blue are expected to win at any cost.

The rivalry among the two neighbourers is evident on the cricket pitch too. Tracing back to the history of matches between these two teams, the first ever test match was played in 1952 at Delhi where India won the series. Both the teams have faced each other many times and have had their share of wins and losses.

It all started with Partition of India in 1947 and then the Kashmir land dispute which prevails till today. Continued efforts to pacify the feud get trampled upon every time by a terrorist attack on India. As a result the diplomatic and political relations are sour between the two countries. Sadly, these events have also affected the game causing fallout on cricket relations. Like, India’s tour on Pakistan in February 2009 was cancelled due to Mumbai terror attacks in November 2008.

Is it justified to spoil the spirit of sports due to political instabilities? In fact this match can be a good reason for both the countries to come together and celebrate the win or loss with pride. Probably this is the reason our Prime Minister, Mr. Manmohan Singh, has invited both Mr. Zardari and Mr. Gilani to Mohali for the coming match. Both the countries consider cricket as one of their prime religions and this could act as an ideal catalyst for the bonding.

All in all, the match between India and Pakistan to be held on 30th March is perceived as “mother of all battles” by every cricket analyst and fan alike. Each player will play not to win but to kill! As both the teams will play for entry into the finals, let it be a win of the great game of cricket and not another reason for the two neighbouring countries to fight. May the best team win!