Have You Been Fooled This April 1st?

Yes, folks, that’s right. It was April Fools 2011! I write this post with the best April Fools jokes and pranks the World Wide Interwebernets has to offer. If you find something interesting , please share it with me in the comments.Â  Thank you in advance ! So let me start with Google’s April Fool Plans :

Google begins its April Fools celebration with this job posting for an “auto completer”. It says “Every day people start typing more than a billion searches on Google and expect Google to predict what they are looking for Google’s quality team is looking for talented, motivated, opinionated technologists to help us predict what users are looking for. “

It adds the requirements as :

Google introduces Gmail Motion, A new way to communicate which allows you to control Gmail with your body.Â Finally. But Gmail Motion doesn’t actually exist. At least not yet…

LinkedIn’s “People You May Know” contact recommendation engine has gotten a little cheeky on this Fools’ Day of April. LinkedIn has begun recommending people who clearly wouldn’t want to become my professional contacts. 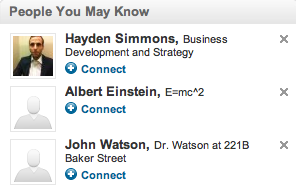 Now that computational search engine Wolfram/Alpha is a little older, it’s time to shed the alpha and change its name and logo, hence–BieberBeta.

Sir Richard Branson has officially bought Pluto, for and undisclosed sum and reinstated it as a planet. In the release, Branson saysÂ “Virgin has expanded into many territories over the years, but we have never had our own planet before. This could pave the way for a new age in space tourism.” We were getting tired of only having 8 planets, thank you Branson.

Via a new Labs app called Body Browser, Google is now allowing you to access an interactive view of the insides of a body… of a cow. Till then it was Human’s Body. Hey, why not?

‘Majhe Jeevan Gaane’: A Quest For A Lifetime By Maheshji Kale

10 Ways To Improve And Evolve Your Personality