Indian Democracy – The Glass Half Full? 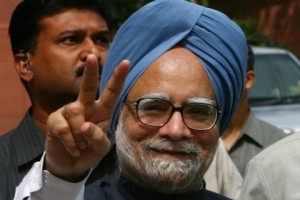 Indian government has repeatedly been under the scanner of various non-governmental international as well as domestic organizations for being a government with no backbone. It is said that when it comes to taking decisions that shall be unpopular amongst the populace but shall benefit the economy as a whole- the nation lacks strength.

Indian politicians receive flak for working only towards a vote bank and not towards the ‘greater good’. Yes, the Indian government has not shown much strength when it comes to imposing decisions that are ostracized. However, what one fails to understand is that why and how is it considered to be a mistake? Democracy is a form of government by the people, of the people and for the people. It is the rule of the people over themselves. How can a democratic leader impose a regulation that his people are opposing strongly?

One very classic example of the same relates to the Chinese communist government. Years ago when the Chinese government forcibly imposed the infamous one-child policy, many individuals and organizations within the country were of the opinion that the government of India should adopt a similar methodology to reduce the high rates of population growth.

However, these policies are backfiring the Communist government big time. China now faces one of the biggest problems regarding child sex ratio in the world. Since families with one child are prioritized in getting government jobs, living quarters and other social benefits, families tend to adhere to the rule. However, in choosing from a girl and a boy most families opt for a male baby as their ‘heir’. The child sex ratio is tilting in favor of male babies since the past many years. This shall lead to innumerable problems.

Moreover, as the population growth rate has been condensed by the regime, the percentage of young people in the working population has reduced drastically. It is estimated that in a few decades time, China will face extreme shortage of young employees as most of its current working class shall reach retiring age by that time. This is an excellent example of how the supposed measures for benefit of the society may turn to be a bane for the society at large.

The fact that the Indian government is not forcing itself on the people can be considered as one of the finest qualities of the government.

The very intrinsic quality of Indian politics of trying to keep the voter’s happy can be seen as a bane or a boom- both are 2 different sides of the same coin.

The same people who generally see India as being weak are the ones who would protest the most during government declared emergencies- as in the regime of late Mrs. Indira Gandhi.

The choice has to be in the hands of the people. It is as is famously said, “Democracy ensures that we get exactly what we deserve”.

There are people in Uttar Pradesh who argue about how Mayawati has been misusing the tax payer’s money in the construction, demolition and reconstruction of parks and statues and other such party propagating memoranda. What these people need to realize is that she has the support of the majority which is exactly what gives her the power to do the same. Had she not been favored by the majority she would not have been holding the seat she is, or doing the work that she is? Conclusively, it is only the power of the majority that triumphs.

As a conclusion, one would like to be reminded that India has a lot of shortcomings but we should not be blinded by them so much that we lose sense of the goodness of it. There are many things that the Indian government does not do- but remember that you would probably be the first one to criticize the government if it did.