Mercy Plea For A Barbarian?

The date has been set — May 24 to May 31st at 4 a.m. — to hang the most barbaric man in India — Surender Koli. The main accused Surender Koli had been charged with 4 murders and given death sentence as his punishment. The Nithari serial murder case was indeed one of the rarest of the rare cases including horrific crimes like kidnapping small kids, sexual harassment, murder and even cannibalism to a gruesome extent . 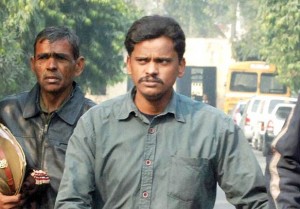 This man now pleads for mercy and files a mercy plea petition to the President of India. I agree that the right to life is everyone’s basic and most essential right but when he along with Moninder Singh Pandher committed such heinous crimes — did they even think twice before murdering innocent kids? In such cases I don’t think even the request for a mercy plea should be given to the guilty — it’s against humanity to let such people commit such horrific murders and then be given mercy. A total of 18 kids had gone missing in Nithari including 1 adult (Payal) and the rest were minors.

This case is an extreme example of corruption, delayed justice and negligence of the police forces of India . During the preliminary investigation the cops were accused of being with the guilty and helping in distortion of facts and deletion of facts. The cops were guilty but weren’t accused in any of the cases. The police were responsible for mishandling of evidences, dereliction of duty and many other things. The compensation given was first returned in protest by the parents of the children because the state government was not even trying to provide justice to them. First, it was a mystery case relating from child pornography racket to organ trade. It was only after Koli’s confession that the police knew the truth.

The unearthing of many bodies of young children hacked into several pieces, thrown into gutters — shook the entire nation to its very core. Even death sentence for such criminals is less. Moninder Singh Pandher had been accused of murder in one case but then was relieved. There are still cases pending of 14 children — it is a shame because the body parts of some children cannot even be located and the guilty is scot free.

How can such a person even file a mercy plea petition? Pool in your views with what you think about such criminals filing mercy petitions — Is it right or wrong?

Pingalwara: 2 Generations Of Sewa And Charity