Anna Hazare’s fast until death received a great amount of response from people. Everybody had only one thing on their mind, i.e., freedom from corruption. People were venting out their anger on the streets, sitting on dharnas and chanting slogans to get freedom from a ‘corruption prone government’. Their anger and frustration was justified, after all, it was the tax payer’s money that the politicians were cashing in. 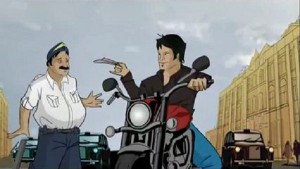 But why is it that we always point a finger towards the government? Why don’t we all, for a split second, look deep inside our own selves and introspect our own actions? The people, who today have come under the scanner for stashing crore of rupees, have actually come under the scanner only because of their position and strata in society.

Do you remember when was the last time you actually took the pain of standing in long queues for booking a railway tickets or getting your license made? Do you remember when did you not bribe a traffic policeman, and get rid of the problem of challaan?

Today, a large number of academic and educational institutions accept hefty sums of money to admit students in their university, and parents pay that amount to get their child a secured seat in that institution. The blame lies not just on the bribe accepting officials but also on the parents who pay these sums of money to get admission.

All of us know for a fact that if we want some of our work to be done quickly,then there is no other option than to “pay under the table”. We know that if we don’t grease the palms of the service renders, we won’t be able to get our job done.

It’s not just the government and authorities who should always be blamed, we as the common people also have some responsibility to share. The constant blame game that’s played should be end. Let’s stop all this here, let’s stop publicizing and fighting on streets. Don’t look for a leader to lead you. Don’t expect politicians to be accountable and law abiding, when you yourselves are not doing the same.

What Is The Role Of A Parent In The Metal-Health Of Their Child?