Taking forward the process of reforms, HRD Minister Kapil Sibal said the government will try to implement in 100 days the Yash Pal committee’s recommendations for setting up of a national commission in higher education and research. 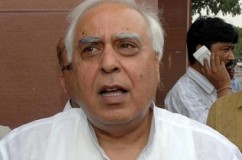 “The report seeks to show a roadmap for future of education in India. The recommendations are pivotal for reforms. I believe it will be accepted by the nation,” Sibal told reporters after eminent educationist Prof Yash Pal submitted the report to him at his office in New Delhi.

“Yash Pal committee has taken everybody on board in preparing the report. We will proceed with consensus and try to implement the report in 100 days,” he said.

The report on ‘Renovation and Rejuvenation of Higher Education’ has been prepared after much consultation with all the stakeholders, including students and teachers, Prof Pal said.

“Our education system has become compartmentalized over the years. We have tried to bridge the gap between institutions and disciplines. We have suggested setting up of National Commission for Higher Education and Research which will be an apex body in education,” he said.

The 24-member panel in its report has said that existing regulatory bodies like UGC and AICTE have no business to perform the regulatory role. The universities will be made self-regulatory agencies.

The National Commission for Higher Education and Research will be a constitutional body like Election Commission. Prime Minister, Leader of Opposition and Chief Justice of India will select people for the post of chairperson and members of the commission.

“We have said these councils will no more decide what should be the design and structure of courses in universities. The universities themselves will decide their own course,” a member of the panel said.

The thrust is to give full autonomy to universities which will function as self regulatory bodies and will be vested with all academic responsibilities. They will design the function and structure of programmes, including the medical and engineering courses, the member said.

The Commission will oversee the functioning of the universities and act as a facilitator for proper growth of higher education and research.

The English Language Remains Aspirational, Learning has been Democratised