According to a new report by Center for Human Rights and Global Justice (CHRGJ), every thirty minutes, a farmer commits suicide in India. It has been estimated that around 2.5 million farmers have committed suicides in the last 16 years. 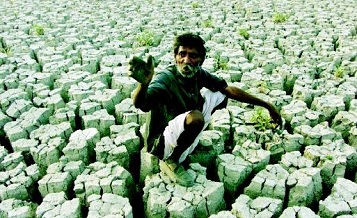 The agriculture in India is mainly dependent on rains or in other words, monsoons. The failure of the monsoons leads to a series of droughts which destroy the work and the funds of farmers leaving them in misery. Also, exploitation by middle men and lack of better prices has left farmer no other choice than suicide. There are about 550 million farmers in India supported by 200 million agricultural workers. Over the past two decades, there have been several economic reforms which have had great effect on the Indian agriculture. These reforms included removal of agricultural subsidies which has led increase in the seed prices thus pushing farmers into debt. Also, these reforms have opened the Indian agriculture to an extremely volatile global market. In short, these have increased costs while reducing yields and profits for many farmers, creating widespread financial distress. As a result, small scale farmers are often trapped in a cycle of insurmountable debt, leading many to take their lives. The budget 2011 has also added to the miseries of the farmers as Indian Government announced its move to reduce the duty on import of raw silk from 30% to 5%. It has also come as a rude shock for the sericulture farmers who were already agitated due to steep fall in the rates of cocoon.

In the recent years, Government has done less to improve the farmers’ conditions. The age old problems of debts and irrigation still haunt the farmers. Government has started debt relief and compensation programmes but they are limited to only a small sections of the large farmer society. Even today, farmers are unaware of their rights. Often, the farmers’ rights to life, food and water are violated. Not only this, but they also suffer discrimination and inequality in society. Times have changed but the standard of living of farmers is still the same. Everyone in the world works hard to eat but the irony is that those who grow food don’t even get a meal a day.