It’s That Time Of The Year Again

As the monsoons near there is a tension in the air. Office-goers, long distance commuters, students everyone silently say their prayers before stepping out. After all, whoÂ would want to face the angst of the Rain God! Roads full of puddles, uncovered manholes, overflowing sewers, reckless drivers splashing water all over the place coupled with the traffic jams make the season a frightful nightmare. Yes, the same rain which is romanticized in cinema is actually quite unwelcome in the real world. 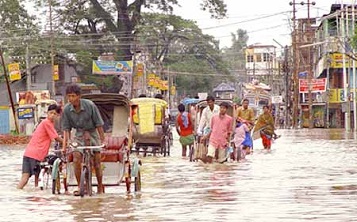 I may sound like a cynic but that is not the case. I love the green landscape during this season, the smell of the earth after the showers and of course jumping around in the rain. Oh and the ‘rain holidays’! I just choose to highlight the negatives to put a full stop to them.

The city’s monsoon woes are well known and the municipality does nothing to lessen them. The papers and news channels are flooded (pun intended) with images of people wading through water collected on the streets. It’s the same story every year. Yet, the municipality doesn’t feel the need to finish the digging that goes on throughout the year at least before the monsoons arrive. We find potholes spanning the entire stretch of roads which collect huge amounts of water and breed mosquitoes. Well, no surprises there when there is a sudden surge in dengue and malaria cases all over the city. Electric wires dangling near the water pose a grave danger. Water lines and sewer lines get mixed on some occasions because of the damage caused by the rains.

It is either a drought or a flood. Middle ground has never been reached due to mismanagement of rain water. Even though we are very well aware of the depleting ground water table, rain water harvesting is still not a very popular concept. Other than bickering over which state gets to build dams over rivers, there is nothing that is being done to address the serious water problem that is imminent. Water conservation, recharging aquifers, reducing water pollution and optimum usage of water are some of the paths we can adopt. It’s high time we do wake up from our slumber and realize our responsibility towards our future generations.

Let’s enjoy the rains- in the right way! It’s in our hands after all to make the most of the opportunity. Let us vow to put our plans into action this season. Then probably we won’t have to sing