The Minister of State for Consumer Affairs, Food and Public Distribution, Mr. Thomas sought to temper his warning with the assurance that if a state government required more food grains, it would be allocated under various schemes for BPL card holder. He strongly asked the states to take measures to bring down damage of food grains during procurement, storage and transportation service. 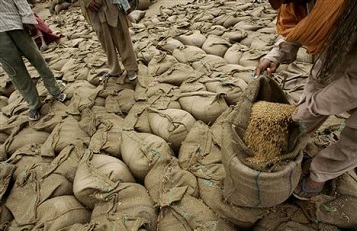 The damage to food grains had come down from 2.5 per cent in 2007-08 to 0.07 per cent this year. The instructions have been given to FCI for introducing mechanization of food grains handling and optimum utilization of existing storage space in the states. Besides this, FCI has been directed to hire as much as possible additional space from private sources to supplement its efforts for proper storage of food grains.

At present the government has a storage capacity of 62.23 million tons of food grains as against burgeoning stocks at 65 million tones. As a result, a significant quantity is stored in the open.

The Empowered Group of Ministers had postponed a decision on the proposal to export 2 million tons of wheat “as international price of the commodity has dipped” said by Mr. Thomas.

The government is planning to setup new additional covered storage capacity of more than 152 lakh across 19 states. The State Governments have also been requested to introduce a scheme for their own storage needs through PPP model.

The government is also taking all necessary steps to ensure that stocks are safely kept and proper quality control measures are taken for the same. During the meeting, these efforts will be reviewed further.

Do you think this measure will help curb the problem of food grain wastage?