One of the burning issues in Assam today is the issue of “illegal Bangladeshi immigrants”. It has been an issue ever since the 1980s. It is claimed that there are lakhs of Bangladeshis in Assam. It is alleged that these migrants cross over to India everyday and have a sinister plan of turning Assam into a Muslim-majority state. There are even accusations that they want to make Assam a part of Pakistan-Bangladesh. To look into these allegations, we have to go into the details. 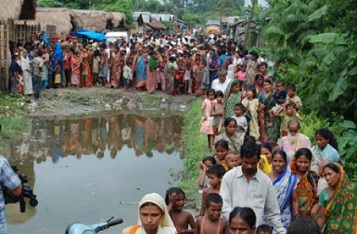 Assam is a state of North-East India. By far it is a kind of a “Gateway to the North-East” as in terms of rail and air links. The largest cosmopolitan city of the region is Dispur- Guwahati, which happens to be the capital of Assam. It is a very diverse state made up of the ethnic Assamese, Bodo, Bengali (Sylheti), Dimasa and the Karbis. The Assamese language is predominantly used in the northern part, whereas Bengali is used in the southern part. In terms of religion – Hindus make up approximately more than 60% and Muslims make up 31% of the population.

During the British period, Muslims from East Bengal districts of Mymensingh and Rangpur were brought in to cultivate lands in the districts of lower Assam. They were settled in the ‘char’ areas or the riverine districts and the surrounding areas of Dhubri, Barpeta, Goalpara and Nagaoan. Many of them later integrated into the Assamese culture and were called the “new Assamese”. These people kept on moving into new areas as their homes by the side of the mighty Brahmaputra were prone to floods. This made them look like Bangladeshis. However, during the 1971 Pakistan Civil War, refugees from the erstwhile East Pakistan took shelter in Assam. After the creation of Bangladesh, refugees from the majority community of Bangladesh left; while mostly those from the minority community decided to stay in India. This is according to a report on wikipedia.

Soon after this the communalists started claiming that a huge number of foreigners, i.e. “miyas”, are registered in the voters’ list and that their votes are hugely going to affect the outcome of the elections in the state. Then on the 14th of February 1983, a claim that “Bangladeshis’‘ voted in the elections sparked off plans for a litte-known massacre, i.e. the Nellie Massacre. It was perpetrated on the morning of 18th February 1983, which killed 2191 people and left several thousand others injured. Unofficial sources and people of Nellie claimed that death toll could be around 5000. In terms of brutality committed just in few hours, probably this is the highest figure of people killed with crude weapons.

This massacre led to the signing of the Assam accord, which made sure that no more genuine Indians would be harassed in the name of evicting illegal Bangladeshis. Also the Illegal Migrants (Determination by Tribunal), i.e. the IMDT Act, was passed. This Act many believed led to a rise in the Muslim population in the state. Thus, it was struck down in 2005 by the Supreme Court and replaced with the The Foreigners Act, 1946. But, the allegations of Bangladeshis crossing over to India kept creeping up, especially during the time of elections. The harassment of the poorer sections of the Muslim community on the pretext of hunting for Bangladeshis continued. The communal parties with the help of some local student bodies started harassing Muslim labourers in some districts of upper Assam, which led to a communal flare up in two districts of lower Assam. The Sylheti Muslims of south Assam are immune from this harassment more or less (except for the poor).

As far as statistics are concerned, there are no neutral evidences to show that even a single Bangladeshi exists in Assam. As per the favourite international hotspots of Bangladeshis for immigration, Pakistan, Saudi Arabia, the UAE, Malaysia and the UK are the ones with immigrant Bangladeshi population of 3000000; 2500000; 1000000; and 5 lakh each in Malaysia and the UK respectively. India features nowhere in the list, except in the imaginations of communal bigots. Moreover, a visit to the Indo-Bangla border will reveal how “porous” it is, as claimed. The only solution to this problem of “Bangladeshis” in Assam is to spread the word of fact, which will counter the bigotry of the communal forces seeking to divide the country.