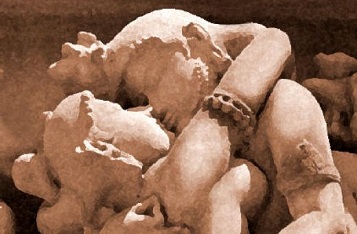 Erotica has been everywhere, even as a form of deity-Kama-the god of love and lust. Tantra, a doctrine of enlightenment also has a sensual side and is aimed at liberation of oneself. Many performing arts, classical dances, ancient poems have a sensual side to them. From a country who took erotica as a part of their rich culture seriously to making it a taboo, we have come a long way.

It has been a very sinusoidal journey for Indian erotica. It did thrive during the earlier part of our civilization but got suppressed and at one point was looked down upon. But, with revolutionizing technologies like the internet, awareness and exposure couldn’t be stopped. People are once again warming up to it. From books, magazines, art including paintings and sculptures to blogs. It’s hard to ignore it. Late M.F. Hussain’s elaborate artwork has always spoken volumes about his inclination to sexuality. While his works have been termed outrageous, unacceptable and indecent by the Indian majority which led to his subsequent banishment from India, he was appreciated for this exact quality elsewhere. He has always been slandered and rebuked in India for provocative paintings. On the other hand, he was the cynosure of international art collectors and art lovers.

His depiction of goddess Saraswati naked was one of the few paintings that have caused a stir among fanatics and puritanical men. Though, some have been a little luckier. Shobha De who is known to have a strong female voice, also falls into this category of always being surrounded by controversies. Maybe our tendency to mix sexuality with morality is the cause of this unwelcoming attitude. Though, these people have a strong fanfare and some new converts every other week, the cat is still in the closet.

People still like to appreciate erotic works in private or read it in the brown paper covered book. While prospective erotica writers choose to blog their talent under pseudonyms, the art society has been a little more welcoming in recent times. Some Indian mystics like Osho have also taken lead in reviving our lost interest. The fact is erotica is still not in the big league. We still do not have a mills and boon-like craze in India. It will take some more time for Indian people and a lot of tolerance to recognize erotica as a respectable and discussion-worthy genre.