How Insensitive Have We Become?

In a brazen act on the 23rd September 2011, a toll plaza attendant was shot dead in Gurgaon by a driver. Initial reports suggest that the 22-year-old attendant, Umesh Kumar Pandey, was killed over payment of Rs. 27 as toll tax – the standard amount needed for cars entering or leaving Gurgaon. 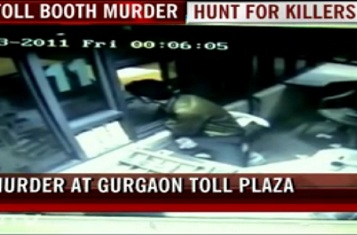 The disturbing CCTV footage surfaced all over the television channels showing how the young attendant is shot at, and how his life ends in a split second. The car owners refused to pay and insisted that they be allowed to go. When Umesh insisted for the payment, an occupant in the car owner took out a revolver and fired at him from point blank range. The bullet pierced his neck, resulting in his spot death, he said. The police have registered an FIR against unknown persons and got the CCTV footage to trace the culprits. (Indian Express)

In another case in June this year,Â a man was set on fire by a crowd in Gurgaon for a crime that was not proved. The police is seen on camera standing by as the man is engulfed by flames.

Just a few days ago, a policeman attacked a mentally challenged man in Madhya Pradesh with a lathi, who eventually started bleeding. The crowd did not try to intervene. The man was then tied with ropes and carried towards the police station.

All this just goes to show how insensitive we all have become. While we move towards a new phase of development nationally, the frustration is growing to a dangerous level. Sadly enough, the reality is that all this is growing to be worse.

We all can fight against monetary corruption. But who will fight against the corruption in our minds? Isn’t it time to build a moral character in the coming generations?

How Does A JEE Topper Study In Multiple Institutes?

Opinion: On Aryan Khan’s Arrest, His Muslim Identity And Living In Post-2014 India

A Day In My Life Helping Young Jobseekers In Nagaland