Mumbai Locals And The Stunt Boys: The New Craze?

Precarious, the stream of thought.
The adrenaline pumps through.
Holding a tiny string,
your life clings on to.

India’s got it’s own bunch of stuntmen. You need not buy tickets to watch them ‘perform’,Â just go to any local Mumbai railway station and there they are in their very element. These pimply faced, skeletal framed boys barely into adulthood transform into daredevils as soon as they set their foot on the train. They usually haunt empty, barren trains during afternoons mainly on Harbour line routes. 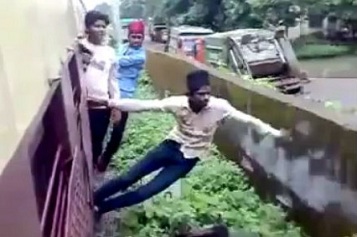 Hanging on to a thin door handle, they leap out in naked air trying to conjure up artsy poses. With the flimsiestÂ of support, they jump out of the train to slap electric pylons along the way and skid along platforms as the train gathers dangerous speed.

If not anything else, then they perch up on top of trains and enjoy the view of trains from up there, completely ignoring the overhead lines carrying fatal electric current. Such acts of rashness are not new to Mumbai local train travel but it’s only now that this trend has assumed notoriously fashionable heights.

All this foolery is also to impress the ladies on train and used as a cover for eve teasing unsuspecting women.

A popular amateur video has been doing rounds on internet, featuring a group called ‘The Reay road boys’ which shows them doing all sorts of stunts on a moving train.

Unfortunately, this video is deemed ‘cool’ amongst the youth thus, propogating unhealthy inspiration. This menace needs to be tackled urgently by making people aware of it’s hazard nature. Alert railway officials need to be stationed on railway platforms especially on the Harbour line route.

Most of these are young boys, indoctrined and trapped in the ‘cool/not cool’ dogma. They have their whole life ahead of them and they risk something so precious by indulging in such rashness. They could get maimed, paralysed or end up even dead. One wrong turn, one wrong step can change their life forever.

Pingalwara: 2 Generations Of Sewa And Charity