“UNIX is simple. But It just needs a genius to understand its simplicity.”Â -Dennis (MacAlistair) Ritchie

Born on 9th September, 1941 Dennis MacAlistari Ritchie (popularly known as Dennis Ritchie) has 2 great inventions to his name, C programming language and Unix Operating System (with Ken Thompson). He also co authored a book “The C programming Language” commonly referred to as K&R (R stands for Ritchie). Although C language was designed for implementing system software, it is widely used today in application development, operating systems and embedded system. C influences all the major modern programming languages today. It’s the influence of C language on all the modern programming languages that has earned Dennis the title of “The Father of Modern Programming Languages”. It won’t be an exaggeration if we say that the multibillion dollar IT industry’s foundation was laid by Dennis because all the work that any software professional or (in fact) any person is doing using a computer is actually using the work of Dennis. 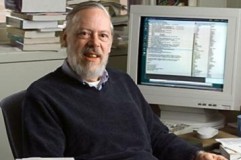 UNIX, which Ritchie co-created with colleague Ken Thompson, was one of the first modern operating systems, that was open in design and flexible, and led to the development of Linux, Android and the iOS that are used in various smart phones, tablets and in the iPod and iPad today.

According to Dr Mark Gregory, Senior Lecturer in Electrical and Computer Engineering at RMIT University,Â Ritchie’s other world changing contribution, the flexible C programming language, “has pretty much underpinned all the development in software and applications over the last 30 years”.

“His legacy is the rich suite of devices and applications that we use on a daily basis. Everything from televisions to phones, tablet computers, mainstream computers, online e-commerce and banking – all of these things we enjoy on a daily basis stretch back to the work done by Ritchie.” adds Mark.

The work of people like Steve Jobs and Bill Gates would not have been possible without Ritchie, said Richard Jones Adjunct Professor at the Australian National University’s School of Computer Science and IT.

Dennis died on 12th October, 2011 at his home in Berkeley Heights, N. J. a week after the death of Steve Jobs. While we saw a lot of media coverage for Steve, none was witnessed for Dennis.

Somebody has rightly said “Real heroes are like black coal they only burn but never shine”.

Quick Byte: Data Is The New Form Of Communication

Can India Learn The Online Pedagogy In A Post-Covid World?

With Only 32/100 Internet Subscribers, Is Bihar Ready For A Digital Election Campaign?