Your Waste Is Someone’s Means Of Living: True Image Of Rag Pickers In India

Sarasa has no last name and no formal education. She lives in the slum in Delhi with her husband and three children. Each morning she begins her day by collecting garbage and she ends her day either vomiting or if all goes well then just disinclined to eat for a few hours, until the stench has receded from her nostrils and her fingernails have been scrubbed clean. 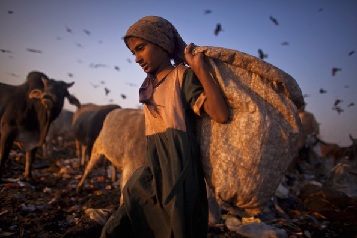 She is a secret environmentalist. She may not be aware of it or may not even understand the term, but she is one of 300,000 little-seen workers who perform a vital role for the city; they rifle the detritus of modern life, recycle anything of worth and carefully dispose the rest. Waste collectors like her are discriminated against, regularly harassed and possess few economic and social rights, but they provide a valuable service. By collecting household garbage they reduce the city’s solid waste management costs, provide a recycling system where none would exist otherwise and reduce the amount of waste which ends up in landfills. They should be referred to as “invisible environmentalists.”

More than 90 percent of India doesn’t have a proper waste disposal system, so the whole responsibility of the garbage dumping relies on the shoulders of rag pickers – one of India’s poorest and most marginalized groups. They are not paid by the state; they rely on meager salaries received from the communities they serve and on meager profits from the sale of discarded items.

India’s garbage generation stands at 0.5 to 0.8 kilogram of garbage per head per day. And we already know that land in India is scarce. India’s per capita waste generation is also very high, that it is a big trouble if a garbage collector doesn’t visit a neighborhood for a couple of days. Then the normal practice is to instruct the household help or maid to take the bags, walk a few yards away — probably towards the end of the lane — and dump the bags there. Slowly and gradually that dump start troubles for the residents and they approach the welfare associations and demand the same to be removed. Only then do we realize the importance of our regular waste collector. Most of the time people don’t even let them enter our houses and many people don’t even let them touch any buckets in their homes. Also, this problem draws on the caste system in our country. Most of these workers are Dalits – the lowest rung of Hindu society who are forced to face discrimination and prejudice.

It is also a common practice in India to not to separate the waste. Battery containing mercury, broken glasses, used medicine bottles or syringe and vegetable peels are often thrown in the same bins. It is considered to be the responsibility of a waste collector to pick up trash by hand, separate them manually without gloves, mask or proper cleaning facilities. Social isolation and unsanitary work conditions lead to illness, injuries, and serious infections. They work a minimum of 10-12 hours every day and are paidÂ meagerly, their monthly income never crossingÂ 3000-3500 rupees.

These workers are also affected by serious problems such as alcoholism, drug abuse, domestic violence and illiteracy. There’s an urgent need for municipal corporations to help them with peer counseling projects, to check child labour and get the rescued children admission in schools. Also it is imperative for them to separate biodegradable from non-biodegradable waste. Non-biodegradable wastes then further should be categorized on the basis of their toxicity. They should provide workers with proper masks, uniforms and gloves. Also, there’s a need to demand a hike in the waste disposal budget from the state. The government needs to invest in new waste disposing technologies so that this issue can be deal with efficiently.

As individuals, we need to make sure that we minimize our waste and use color-coded waste bins – green for biodegradable, white for recyclable wastes and black for other wastes. We should prohibit littering on the street. We should respect everyone in our community and should say a firm no to discrimination. Disposing waste is not a wasteful business.