By Sukant Khurana in Society

In a tragic and disturbing development, over 150 people in the Indian state of West Bengal have died last week from drinking tainted alcohol. While some are still undergoing treatment it is clear that the death toll and overall causalities are bound to rise. As dreadful as this incident is, perhaps even worse is the fact that these types of deaths caused by poisonous alcohol are rather a commonplace in India. Over the past several years, hundreds more similar deaths have been reported begging the question “What is causing these deaths?” 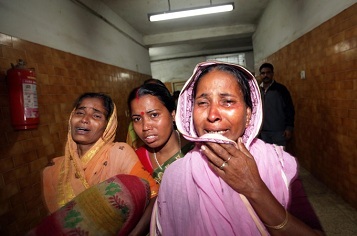 The reasons this bad alcohol is continuing to be made, sold, and consumed is a large societal issue and utter failure of government of India to have an effective ethanol policy. Most of current governmental efforts, whether at the central or at the various state levels, are equivalent of putting lipstick on the pig as they only cure the symptom and not the disease. Recent efforts to make involvement in sale and production of illicit poisonous liquor punishable by death, even though an increase in deterrence, is failing to look at the root cause of alcohol abuse. It will likely take months or years to sort out the societal issues and likely a strong public participation to force legislators to make alcohol policy a real concern and not just an electoral issue. Hoping for quick change in social and economic landscape will be daydreaming, however, if people know what this “hooch” is doing to their bodies the causalities can be reduced. If people can recognize the symptoms and recognize the fact that help is needed hopefully many lives will be saved from now on.

So what happens when hooch becomes toxic and deadly? Hooch is made by distilling cane sugar. This process needs to be tightly controlled because if the distillation temperature rises too high, methyl alcohol is formed instead of simple evaporation and condensation of ethyl alcohol, the regular edible alcohol. Methyl alcohol or methanol is extremely toxic and can cause death in amounts as small as 30ml. When methanol enters the human body, it initially causes similar inebriation symptoms as the ethanol-containing safe alcoholic beverages. In addition, one may become nauseous, experience vomiting, abdominal pain, and central nervous system depression. This central nervous system can manifest as lowered body temperature, heart rate, or breathing rate. If you experience these symptoms it is best to seek professional heath care assistance. At this point methanol poisoning is very treatable.

After the initial inebriation, there is a period of 12 to 24 hours where it may seem like nothing is happening. Internally, the human body is metabolizing the methanol into formaldehyde and eventually formic acid. The increased acidity in the blood and other body tissues due to formic acid has many consequences. The mildest of the symptom is temporary blindness that if not intervened becomes permanent blindness. In absence of timely intervention, eventually, respiratory failure and death can occur. Mortality rates strongly correlate to the length and severity of this increased level of acidity. Patients who survive may suffer from permanent neurological disorders and may resemble Parkinson’s patients.

If methanol poisoning is identified early on, much before the high levels of acid are accumulated, then the metabolism of methanol can be inhibited through the administration of ethanol. The same internal machinery that breaks down methanol will be used to break down the ethanol instead and the more toxic methanol will be excreted through the kidneys. If high levels of formic acid are already present in blood, health care professionals will need to purify the blood through hemodialysis or other methods.

In summary, if you experience nausea, vomiting, abdominal pain, a decrease in your heart rate or breathing, or blurriness vision or loss of vision after drinking hooch, you may have methanol poisoning. This is a potentially life threatening condition, but is treatable. Recognizing these symptoms and seek help to save your life.

Brooks Robinson, in collaboration with Dr. Khurana works on genetic, epigentic and behavioral mechanisms of learning, memory and addiction at the University of Texas at Austin, Austin, Tx. Dr. Sukant Khurana is a New York based scientist, author and social activist of Indian origin who is working on issues of addiction, learning, memory and neurological disorders. With assistance from Brooks Robinson Dr. Khurana is working on a book on alcohol issues of India. Khurana and Robinson’s alcohol related popular news and policy writings can be found at: