At the end of the day, it will be about numbers. Let’s see how do the numbers stack for the different parties(coalition) in Parliament: 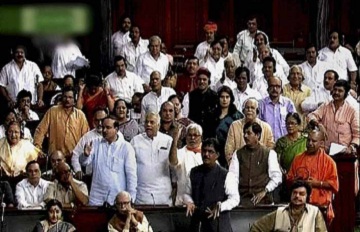 The UPA has a 287 members in the Lok Sabha – good enough to pass the bill. Along with the Congress’ 207, the UPA has parties like the DMK, TMC, NCP, National Conference amd the Rashtriya Lok Dal to support it. On its own the government has the simple majority in the house.

The UPA can also count on the support of the Samajwadi Party, the BSP and the Rashtriya Janta Dal which is giving the government outside support in parliament.

Let’s see how the opposition numbers stack up in the Lok Sabha. The NDA including BJP’s 115 MPs has 150 members in the lower house.

Independents, Left and other smaller parties have a numerical strength of 79

The government is in a poor state in the Rajya Sabha and that is where the real battle for passing the Lokpal bill will be fought. The UPA including 71 of the Congress has 94 members, far short of a simple majority.

Even outside support of the BSP, RJD and SP promises it only 27 more members

Saahil Menghani is the National Political Lead of Youth Ki Awaaz. With a keen eye on the political developments in the country, Saahil is a graduate in Journalism and has previously worked with the Times of India and CNN IBN.

Opinion: The Reality Of BJP’s Love-Jihad Fantasy In UP