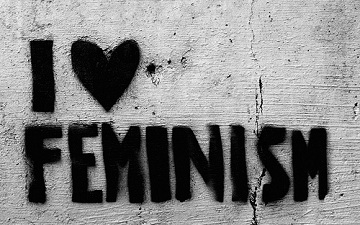 I grew up with My kitchen set,
Grew up buying clothes for My Barbie,
wearing colourful frocks myself,
I grew up trying on my mother’s make-up
And with the scolding for the same,
I grew up admiring the gorgeous and always helpless heroines,
Grew up with secretly idolizing them,
Tried adopting the painful heels,
Subscribed to ask Pooja, Linda, Cathy.

My friend’s bangles became a disputed issue,
A ‘girly’ voice became a target,
If earlier if it was all white,
Now it was all black,
Still no shades of grey.
And It was also internalized now…
And my mind was now a seat of conflict.

My mind, my conscience restricted me now,
Restricted me to follow the “restrictions”.
In breaking the “glass ceiling”,
I constructed a new one.
In ‘exploring’ myself,
I lost myself.
But now I wish to really break ‘free’.

And the ‘freedom’ may consist of
Going ‘back’ or moving ‘forward’,
May be full of contradictions,
Of hypocrisies and of confusions.
But then will this be ‘feminism’ I wonder?
But should I really care, if it is not, I wonder again.

Whether “WOMAN” has “MAN” in it
Or “MAN” comes from “WOMAN”,
It is ultimately we who shall decide
And this power of decision is Feminism,
Or atleast it is, according to me.

Euthanasia: Can The Interest Of An Individual Override The State’s?

“I Am A Dalit!” – In Conversation On Caste Based Crimes

Turup: A Must-Watch Film That Uses Chess To Talk About Exclusion