As per the India’s National Crime Records Bureau in 2010, 8,391 women died in dowry-related deaths, and 44 per cent of all crimes against women in the country were carried out by their husbands and relatives. As the evil of dowry demands and deaths grows, the much popular matrimony website, Shaadi.com has come up with an innovative way of generating awareness about this malaise. 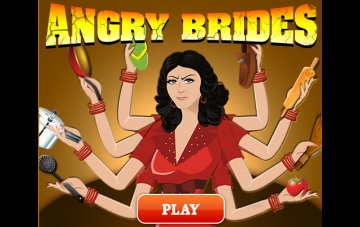 Rolling out the online game, “Angry Brides”, inspired by the extensively popular “Angry Birds” game, the company wishes to engage its audience in an anti-dowry drive. The Facebook based game has already managed a fan base of over 2,70,000, and over 40000 active users.

The players attack prospective greedy grooms with weapons such as stilettos and broomsticks, while the grooms – a doctor, an engineer and a pilot – dodge the attacks while demanding dowries, starting from Rs. 15 Lakh. As the players manage to hit the groom, they win money towards a virtual anti-dowry fund.

In a statement, Shaddi.com said, “Shaadi.com has always believed that marriage is an institution of love, where there is a place for togetherness, mutual understanding, family values and emotional support but not for dowry!”.

Paying and accepting a dowry in India has been illegal since 1961, but the centuries-old tradition of the bride’s parents presenting gifts of cash, clothes, jewellery, even appliances to the groom’s family remains strong.

Demands for dowry often persist well past the wedding ceremonies, and in the worst cases, brides are tortured and even murdered if they or their parents do not comply.

Will this game be able to change the mindsets of people who engage in dowry demands and torture for the same?

While you ponder upon that question, check out the game on Facebook, here.

Why Are Words Like ‘Mental Health’ And ‘Psychiatrist’ Associated With Shame?