Relations Between India And Russia: A Quick Look

India and Soviet Union (USSR) enjoyed a close relationship before the cold war. When the cold war ended, India lost its interest in its victor, Russia, and Russia followed the same behaviour towards India. But the relationship has resurged now. It was Vladimir Putin’s visit to India in 2000 which was responsible for channelling this Indo-Russian wave in the right direction. It marked the ‘Declaration on Strategic Partnership between the Republic of India and the Russian Federation’ in October 2000. In the meantime, the scenario has changed. India has now become one of the fastest growing economies in the world and on the flipside Russia is not a major superpower anymore. 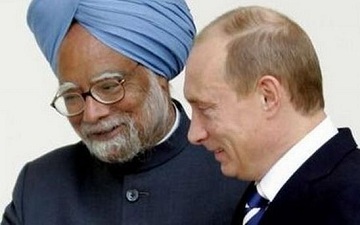 Russian Prime Minister Vladimir Putin was invited to New Delhi as the chief guest for the Republic day parade in 2007. During the visit, India became a major partner of the Russian satellite navigation system “GLONASS”. Then in November 2007, the two countries signed an agreement on joint lunar exploration followed by another agreement to build civilian nuclear reactors in October 2008. Chandrayaan-2 is also a lunar exploration mission proposed by the Indian Space Research Organisation (ISRO) and the Russian Federal Space Agency (RKA).

The two countries have also set up an India-Russia Forum on Trade and Investment to promote trade, investment and economic cooperation between the two countries. The first Forum was held in New Delhi in February 2007. The Indo-Russian trade was expected to reach US$11 billion by 2012.

There is a strong tradition of Indian studies in Russia. Jawaharlal Nehru Cultural Center (JNCC) of the Embassy maintains close links with many Russian institutions. Also, there also about 20 Russian Institutions where Hindi is taught to over 1500 Russian students.

But amidst all this there is a slight area of concern as well. India finds itself in a position where its armed forces are heavily dependent on Russian equipment. Also India should not enter into creation of any kind of Russia-China -India strategic triangle (an idea suggested first by former Russian Prime Minister Yevgeny Primakov when he came to New Delhi in 1998) because it is not possible for the three countries to have the same viewpoints every time and thus the plan might backfire.

We should hope that this camaraderie between both the countries strengthens without a tinge of self-centeredness and take this Indo-Russia tie up another notch so that it not only helps Russia to take some services out of India but also could be a revolutionary step in the path of vision 2020-India.