By Youth Ki Awaaz in Events 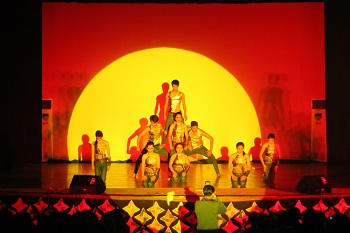 Preceding Tarang the air was electric, charged with anticipation, excitement and curiosity about what the next three days would hold in store for each student. This year Tarang commemorated the 150th birth anniversary of Rabindranath Tagore by celebrating the life and works of the Nobel Laureate through the cultural events. The Pre Tarang event, held exclusively for the students of LSR had the Dance, Dramatics and Music Societies presenting a heady combination of tradition and modernity through their exhilarating performances. What followed was a quality evening of Qawalli by Nizami Brothers who infused tremendous energy in the audience and gave a fitting start to the magnum opus that was Tarang 2012.

The strict security and exclusivity of passes helped manage the crowd extremely well. Their persistence and resilience was then put to test when waiting in seemingly unending queues to attend the dance events and the rock concert featuring Them Clones. From the Flash mob, Pottery workshop to the sight of a large number of people test driving Nano 2012 during the festival, this Tarang was full of unique endearing surprises. The food stalls displayed a great variety of cuisines, the red velvet cake, the momos and kathi rolls delighted many.

The Battle of the Bands, Quriosity – the quiz, Blitzkrieg- the unique LSR one-on-one parliamentary debate, Nukkad natak and Yavnika — the stage theatre competition attracted a large number of participants as well as audience but in the end, it was moments that conspired to make Tarang 2012 unforgettable. Abish Mathew, former Radio Jockey and now comedian kept the house in splits on the second day. His knowledge about the peculiarities of life at LSR and whacky compositions on his guitar had the audience rolling off their seats in laughter.

Tarang is a synergy of creativity, vitality, innovation, patience and immense hard work that is invested by the Student’s Union, organizing committee and the students who make it a memorable and a successful event. The DJ Night ended Tarang with a flourish. Tarang 2012 ends but with a promise to return again next year and fill 3 days of our academic calendar with the colours of joyous brilliance.

By Teach For Green

WhatsApp Co-Founder Is Coming To Delhi. Here’s How You Can Interact With Him