Book Review: “Vivek and I” by Mayur Patel – Of Homosexuality and Society

STORYLINE: In school-going Vivek’s innocent eyes, Kaushik Mistry was everything an ideal man ought to be like: he was intelligent, wise, and humble, he had an appealing personality, he was successful; in short, he was a complete man, for whom almost everything was achievable and worthwhile. Similar were the thoughts of everyone who knew Kaushik. Yet, he was miserable and nobody, in a minuscule town like Valai, could imagine why. 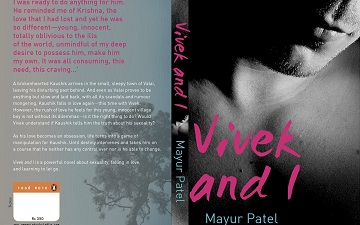 Caught between the desperate attempts of Vidya, a fellow female colleague’s obstinate demonstrations of love for him and his own dilemmatic love-sickness for Vivek; Kaushik, a 26-year old English teacher from Baroda, finds himself questioning his conscience all the time. Though he is sure of what he wants but hurting others is not characteristic of him either.

A voracious lover of nature and innately sensitive to his surroundings and his dear ones, our protagonist Kaushik goes through a number of phases, to some of which he reacts very humanly; hence, ending up directing himself dissolutely.

Unable to bind his love interests to himself, he is left out, torn and devastated. Moreover, his sexual-orientation poses as a major challenge for him of acceptance by and survival in the sneeringly orthodox society.

I found it a little slow-paced; I had never read anything like this which dealt with such a sensitive topic as homosexuality. Author Mayur Patel has tried well to maintain the curiosity factor by seasoning the story with cricket, local teenage spectacles and a persistent threat by a beast on the loose from a jungle.

It surely is a promising plot; however, I, personally do not read a lot of “mush stuff”, so I found it only a little agonizing at some points. The narrative gives an insight of the Western Indian and South-Western Indian cultures (mainly Gujarat, Maharashtra and Kerala), enlightening the reader with the composition of some of the local traditions; like the cuisine of the people and the annual fun melas of Holi. It also draws a subtle distinction between the urban and the rural lifestyles and general nature of people found in the two parts.

Recommended to those passionate for chick-literature, those who would like to attempt to appreciate a topic as perceptive as homosexuality and to those who simply like to experiment with their reads.

P.S. The book incorporates some syntactical and grammatical errors in due course of its narration.