Capital Punishment: A Law, and Rightfully So

The Supreme Court of India ruled in 1983 that the Capital punishment should be introduced only in “the rarest of rare cases“. To name a few, capital crimes such murder, gang robbery with murder, abetting the suicide of a child or insane person, waging war against the nation, and abetting mutiny by a member of the Armed Forces. Currently, 58 nations are actively practising it, and 97 countries have abolished it. 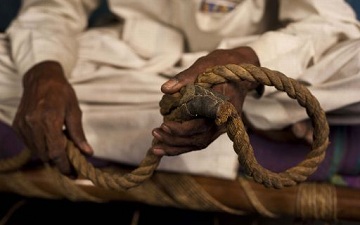 On May 3, 2010, Ajmal Kasab was found guilty of numerous charges and was sentenced to death on 4 counts. But you know what the situation is now — he enjoys great security and comfort, even while he is constricted within the four walls of the prison. Even the government of India is willing to waste lakhs of Rupees on him every day. The question as to why he is still kept in Indian prisons even after his crimes have been proven puzzles me. However, in response to this question, I am reminded of the government’s fear of the reciprocal terrorism that could arise out of hanging him by the noose.

An equally-popular argument raised against Capital Punishment is about how only God is the Giver of Life, and that gives only this supreme power the right to decide to take a human’s life or not. To this, I ask you to think about giving Kasab the Death Penalty as only a measure to prevent any further acts of murder and violence that are committed against innocent people.

Some people say that we should Kill the Crime, Not the Criminals. Yes, true, but that will only come when the consequences of committing these crimes are realised and feared, which the threat of Capital Punishment emphasises. Fear is sometimes the strongest instrument in discouraging a certain act, and to prevent an act as heinous as this, fear-inducing measures are important.

I think if people who have been sentenced to death punishment are only given so, in principle, and not in implementation. The punishment awarded to them is only for paperwork, and if this really is the case, then what is the need of this punishment? Capital punishment might as well be banned if it is not even put to exercise. For, such a visible form of ignoring the provisions of a law does not only violate the law, but it also affects the perceptions of people about the law.

In the 21st Century, Are We Still Learning the Art of Saying No?

Why I Think Arranged Marriages Work in India

Is Online Anti-Women Hate Spilling Over Into Real World Violence?