It was not long ago when the Internet protests started to demand justice for slain black teenager Trayvon Martin. The same went viral on Twitter this last Friday. 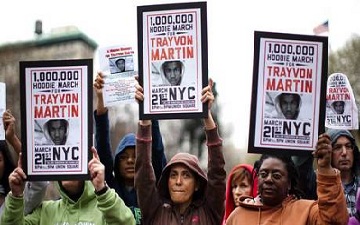 A lot of people “tweeted” their outrage, but some of the Miami Heat players had their own silent way of expressing. Martin was walking around the neighbourhood area of Florida, wearing a black hoodie, before George Zimmerman, his neighbourhood watch captain, shot him.

The issue also got highlighted after Fox television host Geraldo Riviera said that the fact of Martin was wearing a hoodie top could also be partly blamed for his death.

It was after this comment got circulated, the star point guard Dwyane Wade changed his profile picture to one where he had his head bowed down and was wearing a black hoodie. This was to show his concern and at the same time, protest peacefully for justice for Martin. Three hash tags were saved along with the picture, namely #hoodies, #stereotype and #trayvonmartin.

The trend caught up and the followers of these Heat players showed their concern and started doing the same. Similarly, a lot of people also “tweeted” about the same to join the peaceful protest going on over the social-networking website.

Outside Twitter, thousands of supporters have come out on the streets of America to demand justice for the black teenager. And the black hoodie has become a symbol of this mass protest.

On the other hand, George Zimmerman said that he killed Martin in self-defence but he is yet to be caught by the law enforcement. The outrage of the people has risen to such a level that a separatist group, known as New Black Panthers, is offering a whooping amount of $10,000 to anyone who captures him, saying that “If Government won’t do the job, we’ll do it.”

Is There Any Freedom Of Expression Left In Social Media?

“In This Journey Of Confusion On Clubhouse, I Made Friends But Lost Some”