Mirpur- March 22’ 12, Pakistan regained the Asia Cup title after a gap of 12 years as they pulled off a nail-biting two run victory against Bangladesh. 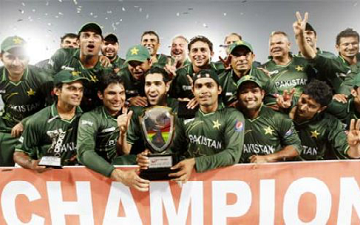 After recording two upsets in the form of India and Sri Lanka already in the event, giant-killers Bangladesh were in for a golden opportunity to create history by halting Pakistan within a reachable target. However, after a thrilling performance from both sides, Misbah-ul-Haq’s men clinched the Asia Cup at the Sher-e-Bangla National Stadium here on Thursday.

The panicked Bangladeshi side was bowled out in the last ten overs as Pakistan held Bangladesh to 234-8, just short of two runs from their 236-9, despite impressive half-centuries from both Shakib Al Hasan and opener Tamim Iqbal.

Pakistan’s lifting the Asia Cup 2012 finals landed the citizens into jubilation as the victory over Bangladesh was celebrated all over the country. The exciting contest was watched on big screens and projectors in numerous cities at different halls, parks and cafÃ©s across the country.

Dressed in green shirts, fans of the Pakistani team could be seen everywhere, especially universities and educational institutions. Even though the Pakistani team won, the Bengal tigers stole the whole tournament by eliminating the world champions India, they said. ‘Pakistan Zindabad’ slogans resounded as youngsters with painted faces in green and white, scattered over all major roadways and corridors of the cities.

Both President Asif Ali Zardari and Prime Minister Yousuf Raza Gilani have congratulated the cricket team and the nation on clinching the Asia Cup title after 12 years. In a message of felicitation, they acclaimed the team’s management, newly appointed head coach; Dave Whatmore, players and the Pakistan Cricket Board (PCB) for becoming the Asian champions and termed the victory, a result of a joint team effort.

While, Pakistani nation which is celebrating its team’s victory in the Asia Cup final, it has also offered their sympathies to the Bangla brethren as they were saddened after seeing them in expression of grief at their defeat. Cheers for both Pakistan and their opponents, Bangladesh, could be heard during the match as a few cities including Karachi, has a sizable Bengali population.

Waleed is the Pakistan lead of Youth Ki Awaaz.