Sustainable Development: In Tryst With Nature

“It would indeed be the ultimate tragedy if the history of the human race proved to be nothing more noble than the story of an ape playing with a box of matches on a petrol dump.” -David Ormsby 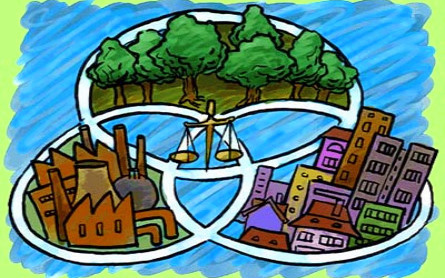 Truer words haven’t been said in the history of mankind. Are we too not playing with the precious resources given to us by nature, the most precious one being petrol? Mankind has been forever tampering with the gifts of nature, misusing it to the extent of depletion and then fighting over for it with others of his kind.

Petrol having multiple uses in the motor industry, soap industry and suchlike has been an ever costly commodity. Total world energy supply i.e. primary energy (2008) was 143,851 TWh and the end use of energy (2008) was 98,022 TWh. Recent estimates in 1993 placed the likely amount of economically recoverable oil at only 1792 billion barrels of oil. The high prices of petrol makes production of own energy a necessity. The global warming emissions resulting from energy production are a serious global environmental problem. When burned, petroleum releases carbon dioxide; a greenhouse gas. Along with the burning of coal, petroleum combustion is the largest contributor to the increase in atmospheric CO2. Atmospheric CO2 has risen steadily since the industrial revolution to current levels of over 380ppmv, from the 180 — 300ppmv of the prior 800 thousand years, driving global warming.

If we don’t want to end up sitting on a petrol dump, please start using solar energy, its free and presumably will always be, Unless US decides to commercialize it, Of course. Commercial solar power is able to generate more or less the same amount of power as generated by petrol, is a cheaper and a better way of doing so. Power towers are more cost effective, offer higher efficiency and better energy storage capability among Solar Power technologies. They say prevention is better than the cure, so a wasted life or a blessed one is all we have to choose between. Join hands, For a better tomorrow. For a better world.