The Monk Who Torched His Body; Revolutionary Or Not?

1949 was the year that made the path clear for many of the Tibetans. People’s Republic of China had taken control over the region of Tibet which gave rise to many protests. For decades now, the Tibetans have been fighting for a free country and ahead of the Chinese President’s visit to India; we saw some horrific events take place. 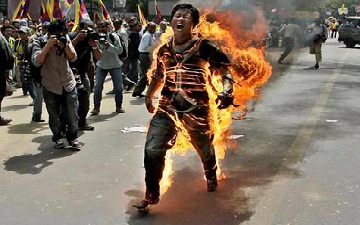 Tibetan monk and exile, Jamphel Yeshi, set himself alight in the Capital on Monday to demonstrate the anger and pain the people of Tibet feel and to protest against the visit of Chinese President Hu Jintao to Delhi for a meeting of emerging-market countries. This is not the first case of its kind. In the past year itself, 30 Tibetans have practiced self-immolation with over 20 of them being currently dead.

Yeshi later succumbed to his injuries but his death was not in vain. A US Senate committee is in the process of passing a bill that would call on China to ease on the atrocities being committed in the name of curbing violence and would also nudge Beijing to release the detained people.

Tibet’s plight has largely been ignored by the world and the Government of Tibet in Exile is India has been recognised by none. While self-immolation would only render the person helpless without his limbs, for the people of Tibet, this seems to be the only neon sign to focus the attention of the world on their sufferings.

The picture of a burning Yeshi incited a hot debate on the Youth Ki Awaaz Member’s page on facebook. While some supported the act of self-immolation as the only way, others called it wrong and that such people should be booked under criminal acts. Some even called it weakness on the part of Yeshi to torch himself. Can we begin to think of what this monk might have had to go through? Reports say that while crossing the border to enter India, he was so severely beaten by the Chinese authorities that it took him two year to recuperate properly.

Yeshi has left behind a note explaining the cause of his actions, the helplessness he feels and has urged his fellow countrymen to unite and fight. He also hoped that his death might at last bring a ray of hope for those still living and bring a change for better.