Hike in price again! Not petrol or sugar but the fine charges are all set to go up. The Union Cabinet has given the green light to various amendments to the Motor Vehicle Act. These new set of rules will apply if the Parliament approves of them. 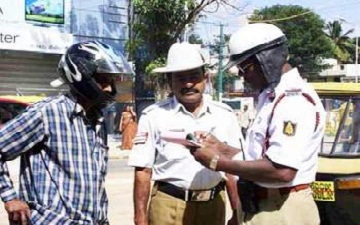 Now jumping the red light would not be so easy and wearing those nasty seat-belts and helmets (albeit for our own safety) will be next to mandatory as a first time offender will pay INR 500 (increase from INR 100) and repeat performances could make you shell out INR 1,500. Chit-chatting while driving on your cell phones will now cost INR 500 while repetition of your antics can burn a hole of INR 5,000 in your pocket. Drunk drivers will have to pay or serve time in jail based on the alcohol content in the body. The fines for drunk driving start at INR 2,000 or 6 months in prison to INR 10,000 or four years in prison.

If you’re caught speeding, INR 1,000 will be flying from your pocket. Repeat performance will see the fine multiplied five times at INR 5,000. Dangerous driving will also cost you INR 1,000 or 6 months in jail. Repetition will tend to increase the penalty substantially. Rash and negligent drivers will now have to fill their wallets before cruising in their cars as the traffic police will be keeping a hawk’s eye on anyone to will dare to step out of the line or road as the case may have it.

Hopefully, only the traffic violations will be curbed by these rules. When money is involved, humans tend to tread more carefully. It can prove to be an exemplary example of the said statement. But, we also have to put all our trust in the hands of the traffic police and hope that they would lawfully abide by their own laws otherwise we will soon hear of cases when violators going scot free and innocent abiders getting fined.

While we can hope it will improve the road conditions in India and will help prevent accidents and deaths, still no rule has yet been formed to restrain the ‘rickshaw wallahs’ and the ‘auto wallahs’. Not only drunk drivers traverse the roads and then sometimes, we find that the roads are at fault, literally. Pits scattered here and there make it a difficult task to drive on the great Indian roads. Every aspect of what makes our roads unsafe should be checked and let us hope that the increase in fines is not taken by the traffic police to mean a raise in their incomes.

The Importance Of Cleanliness In Indian Society