The Fight Of Cartoon v/s Politics: Round 2

Is this real? Seeing a cartoon, if a child were to ask this question to his parents, it is understandable how they would tell him the difference between reality and what’s created for fun. A cartoon, ordinarily, is a humorous representation of our surrounding realities that’s meant to make us laugh. It assumes that we can relate to and perhaps remember something better if it’s illustrated and has some feeling attached to it. 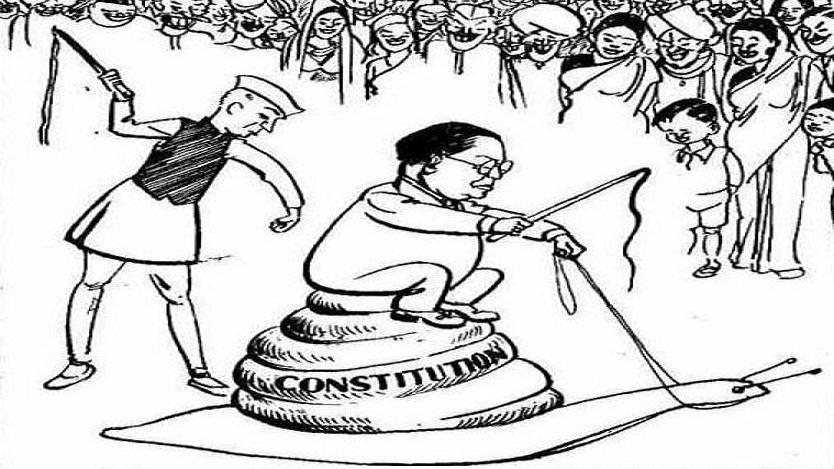 Sometimes, it has been proved, cartoons can be used as tools of political propaganda and clandestine indoctrination. The intention of such a cartoon, obviously not apparent to the viewers for whom it’s meant, can be easily singled out by a discerning eye. Such a cartoon usually has additional identifiers such as accompanying text and the context in which it occurs.

This recent trend within our polity of complicating the meaning of cartoons by drawing unnecessary inferences necessitates, in my view, the need of a revisiting the basic question “What is a cartoon?”

A cartoon showing Dr BR Ambedkar and Pt Jawaharlal Nehru in NCERT textbooks resulted in much uproar in the Indian parliament. This “political storm” required Human Resource Development Minister Kapil Sibal to apologise and say that the cartoon would be deleted, the textbook withdrawn, and an independent review instituted of all such cartoons and other “objectionable” material in all political science textbooks.

As in all cases, there are arguments and counter-arguments, both equally convincing. But debate is for grown-ups for whom it’s the modus operandi to arrive at right conclusions and judge who and what is right.

My submission is simple. Even if a cartoon is ‘polysemic’ i.e. it can be seen as meaning different things, can’t its meaning be explicated to readers in words? Why are we advocating a culture wherein a mere illustration can influence our judgements, make us believe anything and keep us from historical facts? Do we seriously expect that students who know and understand historical facts will be oblivious to them and instead only remember what a cartoon told them?

If there is such a tendency among them, if they are so naÃ¯ve, gullible and impressionable, then this just tells us there’s a serious problem with our education and pedagogy. Are we empowering them to realize the difference between what’s real and what’s a figment of imagination? This is the real issue.

“The Film Makers Have Taken Creative Liberties…” But Till What Limit?