Recent political chaos in Rajasthan has peeled off illusion exposing the differences and sabotage in BJP. In chronological dramatic developments, Vasundhra Raje threatened to resign from party over differences on proposed “Jan Jagaran Yatra” in southern Rajasthan by State party leader Gulabchand Kataria, 54 of the 79 party MLAs come forward to quit in support of former chief minister of the state Ms Raje, and speculations of party President Nitin Gadakari calling meeting in Delhi to handle this issue. Aam junta of Rajasthan is witnessing the clash of egos of two politicians of the same party. Ms. Raje is annoyed with the decision of “Jan Jagaran Yatra” by Mr. Kataria which signals anyone else rather than her being projected as the BJP’s chief ministerial face. Ms. Raje’s move has put BJP in jeopardy. Ms. Raje defied the BJP national leadership summons with backing of 50 MLA’s on her side ready to quit. Her supporters find her stature “taller than that of the party” and promise to extend their support to her in any circumstances. 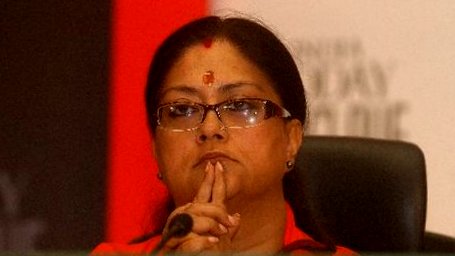 While top leaders of BJP are trying to defuse the situation by talking her on phone and placate her, Mr Kataria marked this revolt as unfortunate stating that yatra was meant for benefiting and strengthening the party. This rift has intensified the situation in BJP and the party’s top veterans are trying hard to resolve the matter. But seeing Vasundhra’s silence the party is airing their concern on this issue and promising to resolve this so called internal issue internally. But if we peep on the other side of this ‘calamity ’in the party a new revelation pops out. Ms. Raje headed the state as the chief minister (2003-2008) and with BJP’s dismal performance in 2008 assembly elections she resigned as leader of opposition after burdened by the moral responsibility of party’s defeat. Now her current outrage depicts the RSS strength in the party and existing pro and anti-RSS lobbies. While Mr. Kataria has Sangh backing, Ms. Raje is dwelling on the supporters stepping down for her.

This fiasco has stirred unrest in the party specially for Mr Nitin Gadkari who is trying hard to recover from the party defeat in Uttar Pradesh, Karnataka scandal and many such debacles. But seeing the current unrest in the party the BJP’s plan to bounce back in 2014 parliamentary elections seems misty.