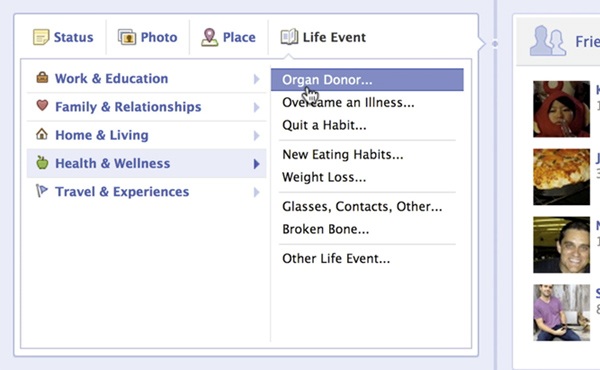 If having the organ donor tag on your driving license was not enough, Mark Zuckeberg has decided to take the next step into this organ donation initiative, albeit digital, and add an additional tab to our timelines on the social networking site, Facebook.

The announcement, which was made on “Good Morning America” by Zuckerberg himself, has caused quite a stir amongst the people, especially the medical fraternity. He explained on the show that it was his friendship with Steve Jobs, the co-founder of Apple Inc, which brought about this idea after Jobs underwent a liver transplant last year.

This new feature, that will be rolled out in the US and UK only, will allow Facebook users to add this relevant information and life story of being an organ donor to their profiles. Zuckerberg hopes that, with social networking growing leaps and bounds, people will be able to connect with one another and stay abreast on trivial information like someone’s organ donation preference. It is almost as important as knowing a person’s relationship status.

With New York Times reporting about 7000 deaths in America due to insufficient organ donations, an initiative like this on the biggest social network of 161 US members will help leverage the organ transplant scene in the country, hopefully reducing, if not eliminating, the number and frequency of deaths caused due to lack of organs. Beside the users adding this information to their profiles, people not enrolled for organ donation will have the chance to find links to the official donation registries to register for the same, thus promoting the idea even further.

Why Do We Provide Free Advertising To Brands On Social Media?

Are We Truly Valuing The Technology We Have At Our Disposal?

How Can You Use Shorter Attention Span To Your Advantage