Recently in Kathmandu there has been conflict around creation of the new constitution. Maoist leaders from the United Communist Party of Nepal (Unified Marxist Leninist) want to make 14 states. However on Sunday, the Constituent Assembly that has worked on the constitution for the last four years dissolved. 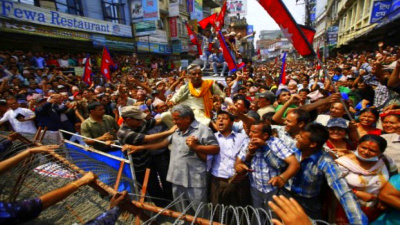 It seems that all is chaos for the UCPN, whose website ironically introduces a pop-up that says Happy Holidays. The Prime Minister, Baburam Bhattarai was asked to step down due to his decision to have a new election in six months, which to most is unreasonable. As a result, the president, Ram Baran Yadav of the Nepali Congress Committee (NCC), has suggested that the government work in caretaker status because Article 38 of the interim constitution says he is relieved of his post in case of dissolution of the Constituent Assembly.

There was a bandh in Kathmandu for two weeks that shut down businesses and closed the private sector. The bandh was called by Rastriya Prajatantra Party-Nepal (RPP-Nepal). Many did not want to risk going out on the streets because they might be attacked or bombed by the protesters or police.

Over fifty caste groups are vying for attention. The states are based on caste lines, which will give strength to particular ethnic minorities. The private sector hopes and dreams of liberal economic prosperity and political stability have been crushed. With over fifty caste groups vying for representation, who is going to represent all of Nepal and unite the entire country?

Last year on February 3, 2011, a new prime minister, Jhalanath Kanal who was a member of the Communist Party of Nepal (a group that merged into UCPN was elected to Nepal’s coalition government. A coalition government means many political parties work together because there is no majority that appears in general elections. Kanal resigned in frustration with the new constitution, so in August of last year they elected Baburam Bhattarai.

The NCC prepares to compromise with other political parties since Bhattarai has to step down. The ambassadors of India and China met with Bhattarai this week to convey their concern over the troubles of the current government. Bhattarai says that citizens need to come together to form a new Constituent Assembly, but we’ll see how the elections turn out given such short notice. Perhaps a majority party can form in the interim.