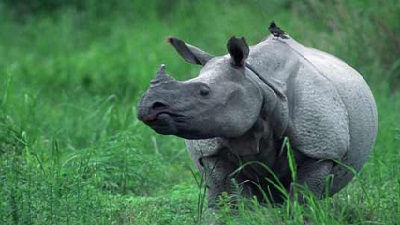 Now rhinos are one of the rarest mammals in the world. Some centuries ago they were good in numbers in north India but in early 19th century their number decreased drastically from thousands to 200. The reason behind their scarce population is the greed of humans. Rhinos are famous for their horn which has its own importance in medicinal market or some magical properties. They are as well killed for their shorn, nail, tail and ear. They have good demand in market which gives a huge amount of money to be earned by the seller.

Rhinos are meant to be the pride of Assam. But their rapidly decreasing numbers have forced the government of Assam and India to take some step towards the protection of rhinos in India. Therefore, extreme care was/is taken to the animal across the reserve forests of Assam especially Kaziranga where most of the surviving rhinos are kept under strict observation. There were projects against poaching and slowly the rhino population increased. In hundred years, the population increased from 200 to 2500 in 2008, Kaziranga accounting 85% of the total population.

As per the 2009 census report, some 2,048 of the world’s estimated 3,000 one-horned rhinos are in Kaziranga. Rhinos have fallen to poachers attacks with at least 18 killed in 2008 and 14 in 2009. Between 1980 and 1997, some 550 rhinos were killed by poachers in the wilds of Kaziranga, the highest being 48 in 1992. The latest case being reported recently at Assam’s Manas National Park. A Rhino was gunned down early in the morning and found dead with two bullets in body and horn taken away.

Government has to take more strict actions for this and the parks who have been allotted with this precious responsibility have to be more careful and accountable. Awareness should be spread about the depleting numbers of this animal. Poachers have to be dealt with more strictness so as to instill fear in their minds. Killing a helpless animal for money is a cruel activity. It is nothing short of a murder. Care has to be taken of this endangered mammal.

Forwarding Messages is Actually Setting Us Behind