Termed as one of the world’s worst industrial disaster that ever took place, the Bhopal Gas Accident took place on the night of December 2-3, 1984. People were caught by the clutches of Methyl Isocyanate as they were peacefully sleeping. 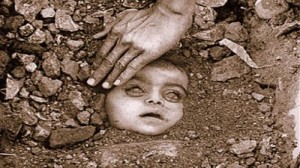 One of my uncles lived with his family in Bhopal at that time (they still do), and as I was doing a study on this disaster, I took out time to ask my cousin about the incident. What she told was horrifying. At that time when the gas escaped from the Union Carbide plant, my uncle and his family were fast asleep. They were caught unaware. While my uncle’s mother and other relatives fled from there to another relative’s house in a nearby village, my uncle chose to stay. As the gas had started to enter the house, he hurriedly closed all the doors and windows. It still scares me to think of what he must have gone through at that time, considering the fact that the gas when inhales, chokes the person and makes him feel nauseating. They all survived, but his sister’s daughter had serious complications and had to get shots. She has problems till this date.

According to the reports, water entered the tank containing 42 tonnes of Methyl Isocyanate (it is not sure what the reason was), which raised the temperature inside the tank and 30 metric tonnes of the gas escaped into the air, taking away the lives of thousands of unaware innocent people with it. The disaster took place just because of the carelessness of the company as it has been found that they didn’t take the necessary protective measures.

In the name of compensation, a meagre amount of money was provided to the survivors and relatives of survivors by the government to satisfy the huge losses they had incurred. Moreover, Warren Anderson was never arrested and he is currently living in New York with wife Lillian Anderson, enjoying all the amenities, while the victims of the gas tragedy mourn the death of their dear ones.

Is this justice done?