Dokra Craft: An Art Form That Needs To Be Kept Alive

Dhokra Damar, a tribe native to West Bengal have been the finest metal-casters in India since ancient times. While the craft is predominant in Bengal, states such as Orissa, Madhya Pradesh and Andhra Pradesh too are centres of the craft. Dokra craft is over 4000-years-old art and its earliest signs were seen in the sculpture of a dancing girl found in the ruins of Mohenjadaro. Dokra artists use a very interesting method to cast metal into the craft, a technique that is known as ‘Cire Perdue’. Cire Perdue is further distinguished into two categories: ‘Solid-casting’ predominant in West-Bengal and ‘Hollow-casting’ predominant in the Central and Eastern states of India. The craft mainly involves creating sculptures of owls, horses, elephants, peacocks, religious images, measuring bowls and lamp caskets etc. 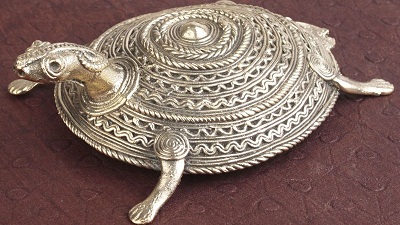 The procedure of traditional Cire Perdue includes moulding a rough clay core sculpture of the required craft. After the core, a layer of molten wax is sculptured over clay and finishing touches are given to it so that the wax layer exactly replicates the required final metal sculpture. Following this, another layer of clay is covered over the wax layer which helps to fill all the cavities in the wax layer. After that, the final closure is baked and molten metal is put inside the holes between the two layers of clay. Because of the heat, the wax melts away and the molten metal takes its shape inside the cavities created from the melting away of wax. After that, the closure is kept to cool down and then the top and inner layer of clay is chiselled away. The last and final step includes polishing and finishing of the metal sculpture. The difference between ‘solid-casting’ and ‘hollow-casting’ is that the core used is of wax and clay respectively.

It is believed that Dokra Kamars, also known as Dokra artists or metal-moulders in Bengal; need to meditate for several hours till the image of the sculpture required is vividly ingrained in their mind. The utterance “Dokra Kamars” has a very deep meaning in Bengali language. In Bengali, ‘Dokra’ is a word of contempt towards poor and low-classed people while ‘Kamars’ mean Metal Casters. Dokra art may be scattered all over India but the number of artisans working on it is diminishing with time. A recent study by the Handicraft and Handloom Export Corporation of India observes that there are only 57 families in the country who are actively participating in the contribution of Dokra art. It also states that Bengal has the highest number of active artisans in India working on the art followed by Orissa, Madhya Pradesh and Andhra Pradesh.

The statistics may paint a dim future for the Dokra craft but all hope isn’t lost yet. A recent publication of the HHECI observes that there has been a considerable increase in the demand of Dokra Art in both the domestic and International market. The Indian government too has shown an improved initiative to revive Dokra Art in the country, organizing fairs and funding artisans. Additionally, technology is playing a huge part in the revival of Dokra craft as many online portals are now showing keen interest in promoting crafts made by these rural artisans. Hopefully happy times lie ahead for Dokra crafts and artisans can look forward to a bright future.