Cancer, a word whose mere mention is dreaded by each person. It is traumatic not only for those who suffer from it but even for those who are close to the diagnosed. Even in this medically advanced world, where there is a solution to almost all medical ailments is possible, a cancer survivor is a miracle. 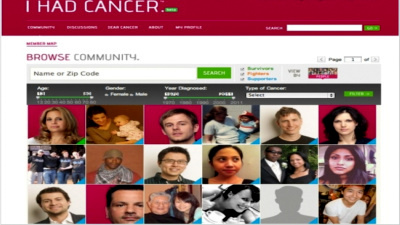 Ihadcancer.com is the first social networking site to work for this section of people, created by a cancer survivor herself – Mailet Lopez. Here people, whether it’s a cancer survivor, fighter or supporter, tell their story and how cancer affected their lives.

We can explore these cancer survivors, fighters and supporters according to their age, gender, the year in which it was diagnosed and also the type of cancer they suffered from. Orange is marked by fighters; green is marked by survivors and blue by supporters. There are 190 pages with 30 people on each page. We can get connected to these people and hear their stories in their own words. People voluntarily agree to share their experiences here to encourage other people to fight the disease.

The site very well answers the question to why should we share our story- it is because1, 500 people die of cancer in US alone every day and every 21 seconds someone is diagnosed of cancer. One segment of the site is dedicated to 5 Words to Cancer where we can tweet our views related to cancer. Later, this campaign utilized Facebook as a means for people to submit a photo of them with their five words.

The site, ihadcancer.com, has received many acclamations as well. The highest being been nominated for both Best Social Media Website and Best Community Website in the 16th Annual Webby Awards in 2012. The Webby awards have been regarded as the internet’s highest honor by The New York Times. The site prenewswire.com quoted its founder, Mailet Lopez saying “I Had Cancer is like the Facebook for cancer, but where Facebook is for connecting with the people you know, I Had Cancer is for connecting with the people you don’t know but you should.”

An initiative like this is commendable. It spreads awareness, encourages and empowers people fighting against it. Sites of such sorts sort should be largely promoted so that more and more people know about them and get an opportunity to lend their support as well.