In a protest that was meant to condemn the violence in Assam and Myanmar, two people lost their lives in Mumbai and 46 were injured. The protest rally organised by Raza Academy at Azad Maidan Ground, took a violent form leading to the incident. The rally had a collection of about 1000 people, who had turned up against the treatment of Muslims in Assam. It is reported that the crowd suddenly became aggressive and put vehicles on fire which included media vans and a BEST bus. 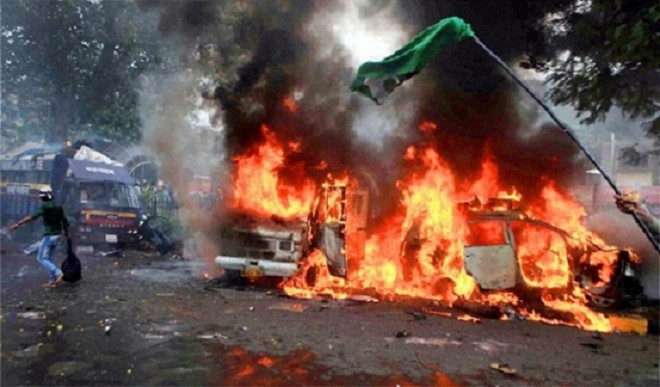 In order to control the mob, Mumbai police had to resort to laathi charge open fire in air. However, the situation was not curbed immediately, leading to the injuries. Though Raza Acadamy tried to keep at bay by saying the they had gathered only to protest and triggering violence was not what they wanted, the president of this academy, who was an organizer of the event, did accept that there was an “irresponsible” speech delivered at the Ground, which could have been the reason behind the whole scene. Reports of poor, wrong and sometimes exaggerated and inflamed coverage of the Assam and Myanmar violence is coming from all over the country, leading to a chain of violent events which is further aggravating the conditions.

The injured are being provided medical help in various hospitals in Mumbai. The condition is now under control, as told by Chief Minister Prithviraj Chavan, who has also said that a state wide alert has been issued.

There is an urge throughout the nation to put an end to the rumours that are spreading on a daily basis, misleading people with tampered photographs and false news. Everybody must at once stop sharing the news which is not coming from any trustable source. Especially photographs posted on social media, which is not actually about the Assam or the Burma incidents, but is taken from other happenings around the world, with totally false descriptions, which are spreading wildly on the web, must not be shared at all. This is no time to play with sentiments and harm everyone in an outside the country belonging to any religion, and hence the treacherous reports should be curbed.