The Real Heroes- Women In Afghanistaâ€‹n

This poem is dedicated to the women in Afghanistan, whose survival itself is a battle everyday, who hide many a secrets behind their veil, whose heart suffers and endures and dares to dream.

In the dusty streets of a war-torn nation,
Where all you see is devastation
There walks a beautiful maiden
Her steps are so small and eyes so laden… 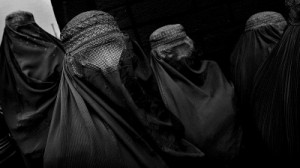 No one can figure out what she thinks,
Behind her veil, she quietly blinks
She is lost in her own hometown,
Not knowing where to go, there appears a frown.

The narrow lanes where as a child she played,
Were no longer there, she felt betrayed
The naughty giggles, the joyous laughter had gone
War had brought with it, a dark dawn…

Kneeling down beside the rubble
All that was real, burst like a bubble
Every corner of the street screamed of terror
The earth beneath her shook, with a slight tremor.

In the pool of dried blood, there lay scattered
A hand that had been lent, when it mattered
Children surrounded her, mourning the loss
Shockingly, to them it was just another hurdle to cross…

Her land of dreams and hope
Was dying, trying to cling on to the rope
It broke her heart, it pricked her soul
This never ending war was creating a Black Hole.

She got up and began the journey back home
A place of injustice, a violent father’s dome
For what else could a woman do
She must forgive and endure the pain too…

You’ll see that maiden walking alone
In the faces of women that once shone
Now, surrounded by gunshots and fear
With a heart that has a lot to bear.