Delhi Youth Gear Up To Fight Against Acid Attacks: Here’s How You Can Join In 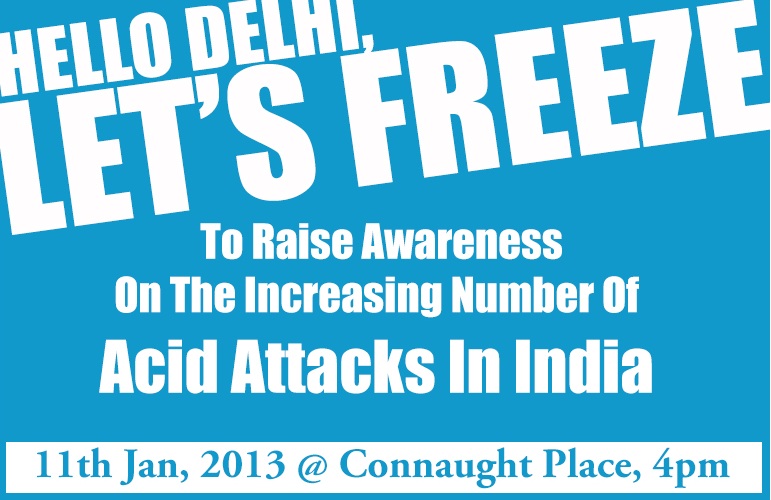 The issue:Â When she was 17, Sonali Mukherjee was left devastated after an acid attack on her. What was more tormenting, was when her attackers were set out on bail after serving only 4 months in jail. Sonali’s case is one of the thousands of other that take place in India – many of which go unreported for over a decade.

Who:Â Frustrated by this situation, Students Against Acid Attacks isÂ organizing a freeze mob at Metro Gate no. 6, Inner Circle (in front of Palika Bazar parking), Connaught Place, New Delhi on 11thÂ January, 2013 from 4 to 4:15 pm to empathize with the young girls whose lives ‘freeze’ after an acid attack.

The freeze mob commences as the whistle blows at 4 o’clock sharp in the afternoon with Students wearing black sunglasses (to symbolize the permanent blindness that acid attack causes the victim) and yellow armbands on left arm (depicting fire which burns the hearts and minds of the girls after an acid attack freezing) for 15 minutes in various postures, from dance poses to human montages (creating various scenes to their liking).

The Agenda: The group aims at urging the parliament to:

How you can join in: Turn up for the event and freeze, at:Â Metro Gate no. 6, Inner Circle (in front of Palika Bazar parking), Connaught Place, New Delhi on 11thÂ January, 2013 from 4 to 4:15 pm, or organize one in your city!