If marriages are made in heaven, the production cost is certainly paid on earth. In a country where weddings are largely a public affair rather than private, we have what are called ‘wedding seasons’, which are precariously dependent on ‘shubh tithies’ and ‘shubh kaal’. And thus starts the most awaited season of the year; spring and autumn can bite the dust. There is, however, nothing natural about this season. It is veiled by a faÃ§ade of embellishments and necessary superfluity. Over the years, weddings have become a wealth parade, a means to brandish extravagance and revel in it. 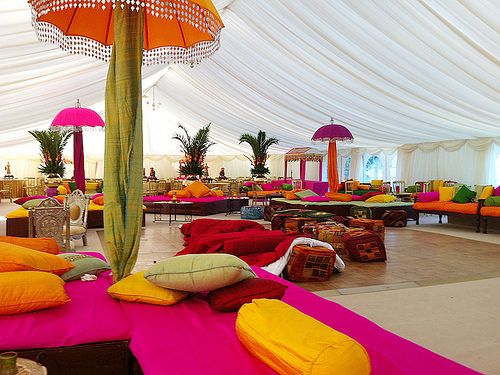 For a typical Indian upper or middle class family, there would seem nothing wrong with an elaborate wedding ceremony and celebration, each element of which is grandiose. When a big shot wedding becomes a matter or status quo, nobody wants to be left behind in the bid to shell out as much money as possible.

The present scenario in India depicts clearly the alarming propensity of families to splurge excessively on a single day of celebration. This implies that a wedding can be commemorated only if it meets with certain standards set by certain people in the society; if it is not up to the mark, it’s just another event disturbing the whole neighbourhood. This increases the money involved in the celebration, often utterly depriving the bride’s side of the family and in some cases, the groom’s too.

This is not the only kind of deprivation that takes place. The adornments and transactions divest the celebration of its real significance, which lies in the marital union of two individuals. Instead what we have is one family pouring money to keep their respectability intact and the other doing everything to ensure that more money is in the pipeline. We have a bride and groom mechanically enforcing the verses of a priest. We also have a bride, so laden with jewellery and make-up that she has shrunken, and her true self is painted by artifice.

Why is it that celebrations inevitably imply extravagance, unnecessary adornments and superfluity? It probably shows the money-mindedness that prevails in our society today, a mindset that measures everything on the yardstick of money. Excess of anything is bad; people often forget that. Exuberance is what should be indispensible in a wedding celebration, and not extravagance.