Most of us are harried and hassled when out on the roads. Bathing in the warm sunlight as you hum a beautiful tune, is the stuff that stories you read in primary school are made of. The impatient traffic out there is bad enough to take a toll on any of us.

However, more frazzled than any of us ordinary commuters are those sweaty, miserable looking creatures in a uniform completely inappropriate for the temperature, who seem truly unhappy with life. Life for our traffic policemen is really not easy. With plenty of inexperienced upstarts driving around in swanky cars and instances of road rage cropping up almost daily, they do have a lot on their plate. 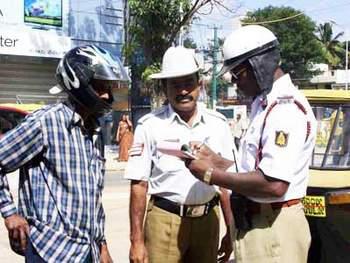 That doesn’t, however, take away from their responsibility. Instead of managing the crowd when it gets unruly and moving about to personally regulate traffic, a lot of the traffic personnel can be seen doing their own little performance on the streets. Stuti, a junior college going student, says they go berserk when they see a car with a red light, to the neglect of everything and everyone else. “Otherwise, they are least bothered about checking people without helmets or seat belts”.

Don’t mistake that for lack of vigilance, though. I’ve had personal experiences with some policemen who’d make it a point to show off and stop you for no fault of yours (or something minor which for the stud in the Mercedes would be an everyday thing) only because you’re a female with a meek-looking driver who doesn’t seem like he’d be able to stand up for you. Their subtlety is incredible though. Things will come to a point where you will offer to loosen the purse strings yourself.

In all the months that I’ve been in Delhi, not once have I seen a traffic policeman check guys when there are three of them on a bike. Or those simply misbehaving. They seem pretty hapless then. I’m not overlooking the fact that our traffic personnel work in such extreme situations and circumstances. But I think their job calls for a lot more vigilance. The un-manifesto would want the government to give up its chalta hai attitude when it comes to such everyday things. Corruption and complacence should not become so commonplace that you begin to make peace with them. Traffic is something that affects us all. You can’t always hope for a conscientious civilian to take the initiative and streamline things on the road like he does at home and work. It’s time we realized that some things are just meant to be governed.