“Jo Mera Hai Wo Mera Hai”: My Body. My Rights

As a woman, you have to fight the eyes of an ogler, the touch of a groper and fight the reflection of yourself which is left behind. Every day is a struggle for safety and every one of us, male or female is a part of this struggle.

The Education Tree, a youth led organization working in the field of arts in education believes that it is the education pertaining to the respect for women which is the most important.Â Their campaign, ‘Jo Mera Hai Wo Mera Hai. My Body. My Rights’ is a crusade against the exploitation and violence perpetrated against women. With the help of unique art forms like freeze mobs, flash mobs, graffiti, they intend to spread awareness about the help lines, women’s organizations, NGO’s and general precautions to help and relieve women in distress. 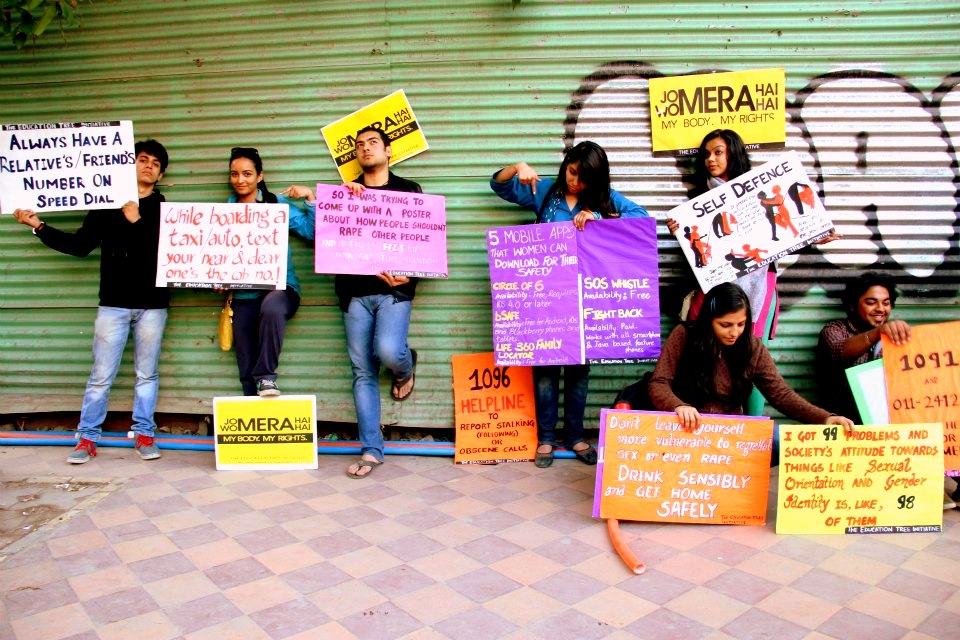 The Education Tree team has already conducted almost a hundred flash mobs in Delhi at places like North Campus, Satya Niketan Market, Kamla Nagar and Delhi Haat. TheirÂ ‘Mega Freeze Mob‘ at DLF Saket was a thundering success and struck a chord with people of all ages alike.

This campaign provides a platform to people from all walks of life to contribute to the change and not just talk tall of the way things are and the way they should be.

After all, when things go awry with one woman in the society, it becomes a battle for all others for the safety of their own self, their daughters, sisters and mothers, girlfriends or wives.

As she lay on the road, stripped of her clothes, wounded and bleeding to death, they passed…
This was the tragic story of the gangrape victim in Delhi and her end was no less than the defeat of the entire nation. But let this not be the story of another girl.