Your Career Or Your Parents’ Choice? Myths And Facts Clarified 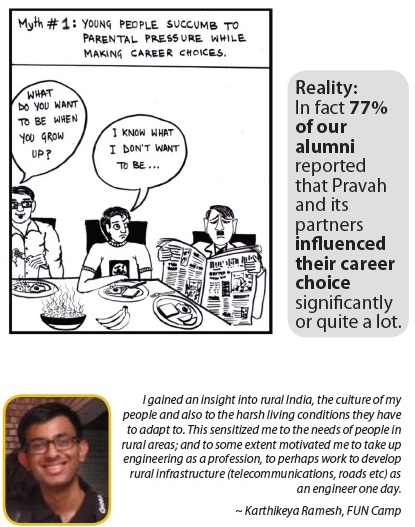 It is commonly believed that parents have the greatest influence over their children’s career choice and that in some cases the concern about disappointing one’s parents is a challenge that young people struggle to deal with. A child’s field of interest may be in absolute contrast with the goals defined by his/her parents. Often well meaning parents don’t realize that their young person needs to determine for himself what he needs to do with his life. They push their children towards a career that may be financially lucrative, rather than give them time and space to find their own calling.

An exploration into how 5th Space has impacted young people’s lives and their decision to choose a career for themselves reveals a different story. It demonstrates that 77% of young people who had been through 5th Space reported that Pravah and its partners significantly influenced their final choice of career.

Being a part of 5th Space and in fact creating a 5th Space in their own lives is instrumental in helping young people to develop their skills, attitudes, values and beliefs — which then, become their guiding light — empowering them to craft a future that they desire. Once they realize their true potential in the chosen area, parental satisfaction is an obvious by-product…thus, fulfilling everyone’s unfulfilled dreams!