“I could have been molested, or raped”, An Account Of How I Was Eve Teased And Couldn’t Fight Back

A five year old girl was raped. Am I shocked? No. I am not shocked; I am angry but definitely not shocked. 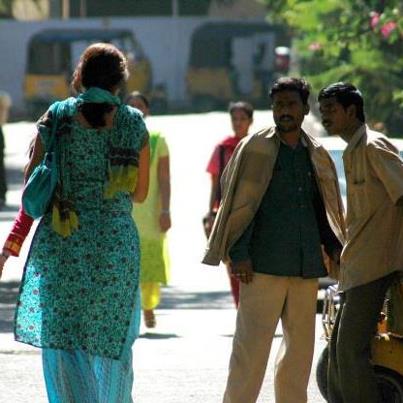 Earlier this week, I was walking to the metro station from work at around 7 in the evening. 7 ‘o’ clock in the evening is not late, nor was the road deserted, that led to the metro station. I was getting a little late, so I chose to walk brisk. A lousy judgment on my part! Now I am a decently endowed woman, whose boobs tend to bounce a little during vigorous activities, a fact I was oblivious to that day. Even as a group of seven boys walked past me, eyes fixed on my boobs, I kept walking, unfazed. Until one of the boys from that group casually remarked, ‘agar baniyan pehenti, toh hilte nahi na’ (If you would have worn a bra, you boobs wouldn’t have bounced) I have been a victim of eve teasing, not massively, but I know how filthy can lecherous men be. I was too jolted to react but with whatever courage I could muster up, I turned and irritably replied- Kya hai? Seven men stared at me, as my mind oscillated between two extremes- Should I fight or is this my cue to run?

Of all the melodrama that surrounds me — mostly that emanates from me every day- I didn’t have a word to say. I have opinions of every issue and I do not ever leave an opportunity to express what I feel but, in that moment, I was skeptical of even raising my voice. Had I shown the boys their place and given them a lesson in human anatomy, I could have been touched, molested, or even raped. Or maybe, they would have been intimidated by my outburst and apologized. I don’t know, I was uncertain. I am living in this uncertainty, so are my parents and my girlfriends.

Instead, I just wore a better bra the next day. While I have put my pairs in a better bra, there are seven men who’re probably eve teasing a girl every day. I failed as a citizen and, more importantly, as a woman that day.

Opinion: This Bombay HC Judgment Shows That Indian Courts Do Not Understand ‘Gender’