No Country For Dissenters

In India, nothing says freedom better than masquerading your way to jail! Don’t get flabbergasted, its true. Though the Indian constitution provides for Freedom of Expression, the Indian leaders don’t. Beware of opening you sorry little mouth and letting the words fall out freely. If you do that, be prepared to be harassed by myriad web of moral police and its keepers. 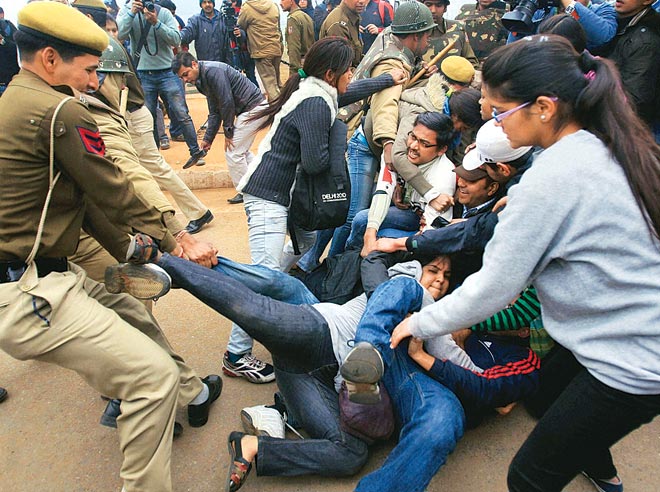 Freedom in any form that might prove detrimental to a patriarchal society or its legions of followers is strictly prohibited in our country. If I say this, so and so might take offence; If i did this, another party might be irked and the ramifications are numerous. Sentiments are hurt, protests carried out, effigies burnt, sometimes over an issue as small as speaking inÂ favorÂ of someone from another community. Fatwas are issued against those who dare to touch their religion and itsÂ whimsicality.Â Every community brings its own set ofÂ dictumÂ to the table and you have to adhere to it, even if it is a blue-sky diktat. Being pragmatic and open-minded are the two traits which might get you into hot water.

The canvass conceals more than it reveals, the 50 shades of black our country is painted with. Women are raped in daylight and the length of their skirt is blamed! And behold, this comes from the so called elite leaders of this incredible country. How could a man be responsible for this! It’s a woman’s fault, she must not wear such provocative garments. Women must not go out alone at night, better if they stay within the confines of their homes. One of our eminent leader raised the bar with his preposterous remark that rapes happened in India and not Bharat.

The day is not far when you could be jailed for the way you dress! From now on, it is advisable to teach kids at an early age the consequences of speaking up, being right and fighting for something right. So that, when the time comes, they don’t blame poor parents for teaching them the right thing. The government is already doing a commendable job of silencing people with voices, it’s only a matter of time before this country surrenders to the power of censorship. Freedom of expression is the costliest item on the shelf these days. It might even cost you your life.