Do You Doubt Your Maid Every time Something Goes Missing?

By namrata kumar in Society

We take them for granted. Just because we pay them, we assume that it’s okay to take advantage of them. They are always there for us, for some of us right from the time when we are born. They are essentially our care-takers yet we don’t acknowledge that. We waste no moment pointing a finger at them when something goes wrong. Just because they are our workers and because they are less privileged than us, is this any way to treat them? 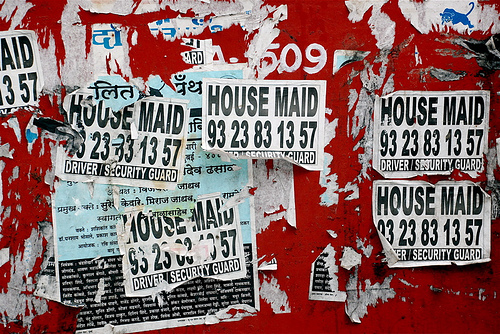 It is safe to say that the children who live in my locality are educated and come from good homes. Like most others, I love going out for walks, particularly in my locality. The other day as I went out for my usual walk, I noticed a group teenage boys making fun, abusing and teasing a house-keeper (who was minding his own business). I suppose making fun of workers in English allows one to get away from the fear of being caught especially since they (workers) are not so fluent in the language. This is one problem with the youngsters who live in my locality and I am no exception. I am to be blamed just as much as those teenage boys, as I stood there watching this incident and doing nothing.

On hindsight, I regret this action. I see most children misbehaving with the workers, I see young children as little as six or seven years old who demand respect or often rebuke their maids for doing something incorrectly. As much as we want to deny it, when something goes missing or wrong, our mind often suspects the people who work for us even if consciously we don’t want to think so. So, even if it’s a missing chain or something as small as an eraser, it takes less than a second to point a finger at them. Eventually you realise that the culprit is your own carelessness. It’s unfair to them. They deserve just much as respect and love as anybody else.

There will always be a certain level of hierarchy in society but that shouldn’t mean the ones who are below us in hierarchy, deserves any less respect than the ones above us. They are human beings, they too have feelings. A little bit of sensitivity will go a long way in making them feel more comfortable and accepted and us as better individuals, don’t you think?