Still Unwelcome: What Does The LGBT Community Have To Say About Religion?

By Lata Jha in LGBTQ

While religion and specific religious views might condemn homosexuality and same sex marriage, it is interesting to know what the relatively non vocal LGBT community has to say about religion.

Ahead of expected Supreme Court decisions on the Defence of Marriage Act and California’s gay marriage ban, a new survey conducted by the Pew Research Centre has shed light on the religious views of homosexuals in America. The findings state that about 48 per cent of them say they have no religion at all. This is much larger a share than people among the general population who think so. The 51 per cent who do follow a religion, are mostly Protestant or Catholic. 17 per cent in fact say religion is “very important” in their lives. 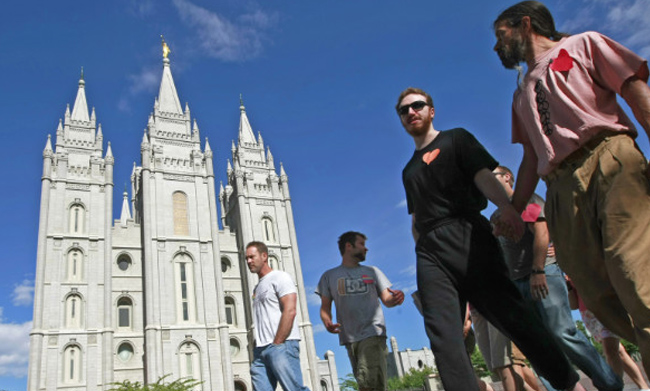 A third of the LGBT community however felt there was a conflict between their religious views and sexual orientation or gender identity. This sentiment is even more prevalent among the general public. About three-quarters (74 percent) of white evangelical Protestants and a majority (55 percent) of all U.S. adults who believe in religion say that homosexuality conflicts with their traditional religious beliefs.

Most of those surveyed felt religious institutions and places were unfriendly and unwelcoming to the LGBT community. About eight in ten cited Islam, Mormonism and the Catholic Church as examples of such spaces. Nearly three-fourths named evangelical churches. Fewer people said they found Judaism and non-evangelical churches unfriendly, but they said they are usually more unfriendly than friendly. About three-in-ten of the respondents added that they have “been made to feel unwelcome at a place of worship or religious organization.”

The survey did not ask about friendliness or unfriendliness among religious groups apart from Muslims, Mormons, Catholics, evangelicals, Jews and non-evangelical Protestants. Previous surveys from Pew and other organizations have actually shown that despite their church’s official stand against same-sex marriage, Catholic Americans are one of the most liberal religious groups when it comes to gay rights.

While experiences show that a lot of attitudes towards the LGBT community are changing, their history is too painful to ever be completely forgotten. We might have come a long way, but we have an even longer way to go.

By You're Wonderful Project;

These Shocking Truths About LGBTQ+ (Phobia) Show India Doesn’t Get That LOVE Is LOVE!

Does Your Period Tracking App Ask You About Your Sexuality Or Your Contraceptive Pills?